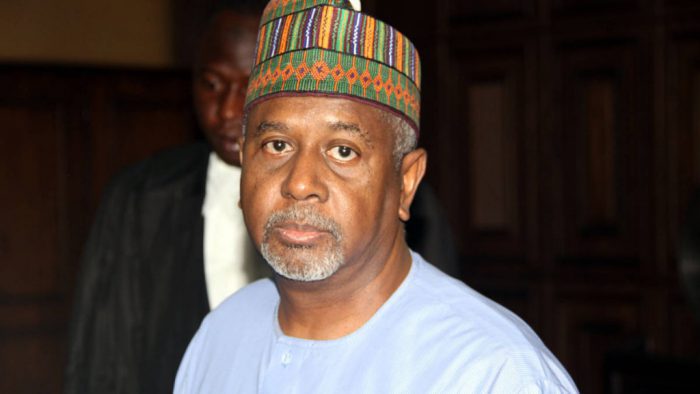 An Abuja division of the Federal High Court has adjourned the trial of a former National Security Adviser, Sambo Dasuki, to January 9, 2019, after he questioned the right of the federal government to continue the trial while ignoring a court order for his release.

The presiding judge, Ahmed Muhammed, made the adjournment on Tuesday after the defence counsel filed an application touching on the competence of a counsel to the complainant to further prosecute Mr Dasuki.

Mr Dasuki’s lawyer said they want the matter adjourned indefinitely until the Nigerian government complies with a court judgment of July 2, which directed that Mr Dasuki be released immediately.

Mr Dasuki had also made a similar request in a previous hearing.

The court had during its last sitting on November 19 adjourned the matter till Tuesday for the continuation of the trial.

But in the opening of the session on Tuesday, the defence counsel, Adeola Adedipe, said he had filed an application before the court.

“We filed an application this morning in court after an extensive deliberation on the right approach. The issue raised in the application is such that having formed part of the court record, the court has to avoid a situation where it would have acted in vain if further trial is conducted today. I submit that it is primarily incompetent to further prosecute trial in this case. It is a threshold issue.

“The application filed on December 11 and dated December 10 should be set down for hearing as against continuation of trial primarily because the said application touches on the competence of the counsel of the complainant to further prosecute this matter.”

Responding, the prosecution counsel, Oladipupo Opeseyi, told the court that he received a copy of the application Tuesday morning in court and was yet to know the content.

Mr Opeseyi said the business of the court for the day was the continuation of trial.

“The business this morning is for the continuation of trial and on November 19, this court made it a date for a definite hearing.

“So the said application by my learned counsel to be set for hearing is premature and cannot be a basis to discharge the scheduled hearing of this court.

“When we get to bridge, we shall cross it. Let’s continue with the daily business and call our witness. I reserve all comment on the application as it is premature,” Mr Opeseyi added.

Subsequently, Mr Muhammed granted the request of the defence counsel to set the application down for hearing as against the continuation of trial.

“If the court continues with trial with the surrounding circumstances, it thereby betrays the said application of the defendant filed December 11 to this court. It seems to be that the defendant is basically challenging the right of further prosecution by the learned senior counsel.

“If the court decides to continue with the trial today, it means the court has automatically determined the said application without hearing.

Mr Muhammed then adjourned the matter to January 9 for the hearing of the application.

Mr Dasuki was arrested in December 2015 and has remained in detention since then despite several court orders for his release.