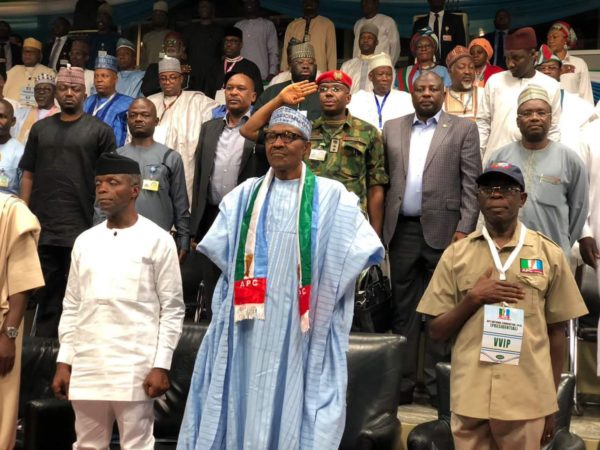 President Muhammadu Buhari, will on Friday, 28 December flag off his campaign for second term bid in Uyo, capital of Akwa Ibom.

Sen. Ita Enang, the Senior Special Assistant to the President on National Assembly Matters (Senate) made the disclosure on Monday while briefing newsmen in Uyo.

Enang said that the President would be in the state with National Chairman of the party Comrade Adams Oshiomhole and national leaders of the party.

He said that the party would use the opportunity to formally present the party’s flag to APC gubernatorial candidates of Akwa Ibom, Cross River, Rivers and Delta respectively.

“President Muhammadu Buhari and 2019 Presidential Candidate of the All Progressives Congress candidate will be in Akwa Ibom on December 28 to flag off the 2019 campaign of the APC.

“He will be here to formally launch his campaign and flag off the 2019 Presidential election campaign, “Enang said.

According to him, the campaign will kick off in Akwa Ibom because the state has accepted the President fully and the state is ripe for harvest by the party.

The Presidential Aide also revealed that the party has requested from Akwa Ibom Government permission to use the Akpabio International Stadium.

The Akwa Ibom Government has approved the use of the stadium, the Commissioner for Youths and Sports, Mr Monday Uko, has said.

Uko told newsmen in Uyo on Monday, adding that the approval became necessary following the decision by Julius Berger Plc. to recall its staff from their scheduled holiday.

“Following a decision by Julius Berger Plc to recall their staff from their scheduled holiday, the Akwa Ibom Government approved the use of the Nest of Champions Stadium, Uyo for President Muhammadu Buhari’s rally on December 28.

Uko added that all the terms stipulated by government for the use of the facility would be enforced.

He stated that the organisers of the rally were expected to liaise with the stadium management for further details.

the state government had on December 23 issued a statement that it would not approve the use of the stadium for the presidential rally due to the Nigeria Premier League matches billed to be played at the stadium, when the competition begins next year.

Said Enang: “It is public facility, a collective heritage of the Akwa Ibom people, Buhari is the President of Nigeria and nobody can restraint him from the use of certain facility anywhere in the country.

“The president has been fair and kind to Akwa Ibom people, ” he said.