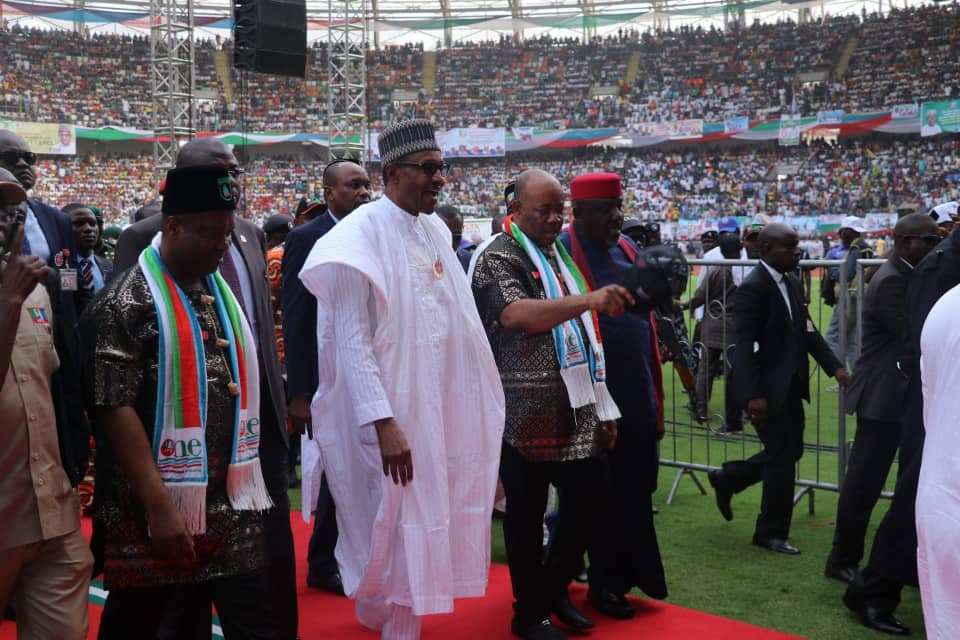 President Muhammadu Buhari on Friday flagged off his campaign for re-election in Uyo, Akwa Ibom state, with a promise not to fail Nigerians.

“I assure you that you will not regret trusting us,” Mr Buhari said from the stage, where he stood with other leaders of the All Progressives Congress (APC), to address the large crowd at the 30,000-capacity Godswill Akpabio International Stadium.

Mr Buhari said his campaign in 2015 was anchored on security, economy, and anti-corruption fight, and that his administration has done fairly well in these areas.

The president insisted that his administration has won the battle against the insurgency in the country’s North-east region.

He said Boko Haram was now focused on recruiting and indoctrinating young men and women, and sending them out as suicide bombers to blow up soft targets like markets, churches, and mosques.

“I assure you that eventually, we are going to clear them off from our country,” President Buhari said.

The president said, through the effort of his administration, the country has regained food security.

On his administration’s war against corruption, President Buhari said he has learned to do things differently, compared with when he was a young military ruler.

“When I was around in uniform and much younger, I arrested from the president, the vice president, the governors, the ministers, I told them that they were guilty until they can prove themselves innocent.

“When I came into agbada, I decided to follow the system. Those who are corrupt would be investigated and prosecuted.

“We are doing that and we will not stop.

“I assure you we have collected properties, we have collected cash, and we have gone back to single treasury account – all monies are going into government purse with one account which means it can be traced and accounted for.

“Nigerians will be informed from time to time how much we have recovered and from who and how we are going to use it to develop this country.”

The president thanked the people of Akwa Ibom and others in the South-south for coming out to welcome him in Uyo.

President Buhari was accompanied to Uyo by the APC national chairman, Adams Oshiomhole, a national leader of the party, Bola Tinubu, and some of the APC governors, including Rochas Okorocha of Imo State.