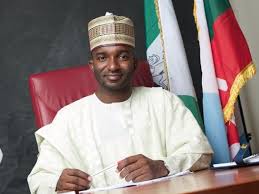 The Chairman Adamawa United for change, Dasin Musa, has berated Senator Nyako Abdul-Aziz, for accusing Bindow of neglecting them after bringing him to power in 2015.

A statement issued by his media office, Dasin said Senator Nyako has continued to display unabated, his exclusive and uncommon strand of gubernatorial madness when they attempted to rubbish Senator Jibril Aminu who was the link man between Obasanjo and his father in 2007.

The statement said Senator Nyako did not provide any shred of evidence to prove his claims of bringing Bindow to power in 2015.
We know that Senator Nayko craves attention and always wants to be seen in the media to be exposing and fighting Bindow. However, we will burst his bubble this time and will not indulge him.

If he is a good student of history, Senator Nyako ought to know by now that no one takes him seriously anymore, especially whenever he makes those cooked-up vile, malicious allegations against Bindow. This new concocted story is not any different from the previous numerous false allegations he has made against Bindow it said.

Senator Nyako recently accused Bindow and the APC of neglecting him and his father after 2015 polls and went ahead to file criminal charges against his father Murtala Nyako using the EFCC.

“What happen between Murtala Nyako and Senator Jibril Aminu is well documented, we witness how Jibril Aminu serve as a link man between Obasanjo and Murtala Nyako, before Nyako was eventually made the Governor of Adamawa State in 2007, but what did Jibrill get, he was treated with scorn from the so called people that is crying wolf now that Gov. Bindow and the APC betray them.

“We know how Bindow and the APC won in 2015 in Adamawa, but today it baffles some of us that Senator Nyako is also a beneficiary of the SAK movement in 2015 could raise alarm that Bindow won because of his family political support base in Adamawa.

“Ordinary if not that the people are tired of the PDP government, how can Senator Nyako found himself in the senate today? We all know the effort made by Murtala Nyako in 2015 to make Abdul-Aziz Nyako succeed him in office before it was resisted by some of us that believes that politics should not be limited to family and friends.

“This fresh attempt by Nyako to distract Nigerians from his earlier false politically motivated allegations against Bindow that the APC meted injustice to him and his father will not fly as Bindow himself and the people know those that contributed financially to APC in 2015 in Adamawa. We all know election in Nigeria involves lots of money, without money can the political support base Nyako claimed he have deliver votes to APC in 2015? the duo of Senator Nyako and Gov. Bindow are beneficiary of Buhari integrity in 2015, we wonder why Nyako is taking credit for 2015, where as President Buhari is their benefactor.  Dasin opined.