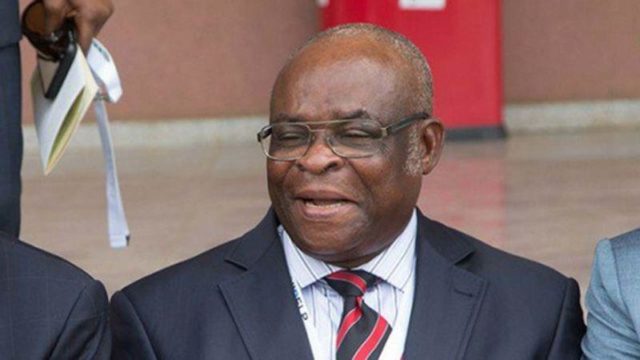 The party made the allegation in a statement on Monday by the PPCO Director of Media and Publicity, Mr Kola Ologbondiyan, in which it condemned the planned arraignment of the Chief Justice of Nigeria, Justice Walter Onnoghen.

It described the move by the Federal Government as an assault against the judiciary, claiming that the government was making an attempt to “forcefully remove” the CJN.

The PDP also accused the ruling party and the Presidency of attempts to blackmail Nigerians who have condemned the planned arraignment as “being sympathetic to corruption”.

It alleged that apart from failing in all its promises, the APC and its presidential candidate were beginning to manifest autocratic attributes, as well as encouraging corruption.

The opposition party, therefore, challenged the ruling party to name one of its member that has been investigated, prosecuted or arraigned before any court for corruption in the last three and half years.

Read the full statement below;

The Peoples Democratic Party Presidential Campaign Organization (PPCO) accuses President Muhammadu Buhari and the All Progressives Congress (APC) of desperation in the assault against the judiciary with the attempt to forcefully remove the Chief Justice of the Nigeria, Justice Walter Onnoghen.

It is despicable that rather than retracing their steps from the ignoble act against the CJN, after the spontaneous public outrage that trailed the shameful act, the APC and the Buhari Presidency are attempting to blackmail Nigerians, who condemned the assault on the judiciary, as being sympathetic to corruption.

The Buhari Presidency and the APC, in this venture, have exposed their desperation to subdue and annex the judiciary, particularly, following increasing agitation by Nigerians for the prosecution of President Buhari’s cronies and APC leaders over exposed corruption.

The Buhari Presidency and APC in turning around to fight Nigerians have further exposed their desperation to replace Justice Onnoghen with a pliable CJN, who will execute their plots to use the courts to detain opposition leaders as well as vocal members of the Civil Society during the elections.

It is now crystal clear to all Nigerians that apart from failing woefully in all its promises, the APC and its presidential candidate, President Buhari, are beginning to manifest their autocratic attributes.

Furthermore, the Buhari Presidency is not only corrupt but has become an asylum for corrupt people. The PPCO, therefore, challenges the APC and the Buhari Presidency to name one APC member that has been investigated, prosecuted or arraigned before any court of competent jurisdiction in the last three and half years in spite of their humongous corruption.

If for anything, President Muhammadu Buhari has encouraged corruption in our nation more than any President that had the privilege of governing our country, Nigeria.

It is important to restate that the Buhari Presidency is now a refugee camp for known and well-advertised faces of corruption. From the factional National Chairman of the APC, the co-chairman of the Buhari campaign Organization, the Director General of the Buhari Campaign, the zonal directors and the recent entrants from Bauchi and Gombe states, all leaders of the APC and Buhari campaign structure are all candidates of the Economic and Financial Crimes Commission (EFCC).

We, therefore, charge Nigerians not to be deterred by the attacks by the Buhari Presidency, which has since become desperate and anti-people following its rejection by Nigerians because of its corruption, incompetence and insensitivity to the plights of our citizens.

Director of Media and Publicity,