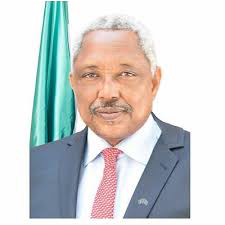 Chairman of Adamawa Youth for Change, Alhaji Musa Dasin, has reacted to a statement against Gov. Bindow by Amb. Aminu Iyawa.

He mocked the Ambassador, saying Iyawa is over excited about his appointment as an Ambassador.

Dasin further advised Iyawa’s children to buy their father a gag. Dasin insisted that he would not stop criticizing Iyawa for the embarrassment he has become to the people of Adamawa State through unguarded utterances against Bindow.

Its spokesman, Samson Pwanomoho, said“ Iyawa could not even check the records before proclaiming that Governor Bindow fails to deliver Adamawa for Buhari, how do Iyawa expect Bindow to deliver the State Buhari more than what the governor has done’.

“This man talks like a man who is constantly under the influence of some substance and perhaps possessed as he employs the language of a tout with no civility. He is probably constantly excited and incensed by the fact of having his first opportunity to find himself in the corridors of power.

“we all witness how many APC chieftain loose their states to the opposition, the likes of Adams Oshiomhole, Godswill Akapabio and many others face similar faith, we want Iyawa to tell the people of Adamawa if these party men also sold their states to the PDP?

“He pontificates and talks as if the relection President Buhari depends solely on him to deliver. He once publicly attacked Bindow during the last APC primary in Adamawa State.

“This is a man who cannot stand for councillorship election and win. We challenge him to state what his contributions are in the election of our amiable President, Muhammadu Buhari, and what new ideas he has contributed to making Buhari administration more effective since his appointment as ambassador.

“With an easily excited man like him as an ambassador, the nation has continued to lose relevance in eyes of the Mexican people due to his character of vituperation against eminent members of the society. He needs to do more work and talk less because social media propaganda cannot give him the relevance he is looking for”.

PP Elisha to Fintiri: Focus on paying the 32000 minimum wage immediately; as your...