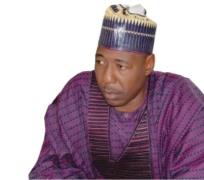 Borno State Government on Saturday, began disbursement of N39.2 million loan to 1, 307 traders, to encourage the growth of Small and Medium Scale Enterprises(SMSEs) in the state.

Gov. Babagana Zulum inaugurated  the disbursement at the Custom Market in Maiduguri.

Zulum disclosed that over 10, 000 traders and businesses were targeted to participate in the scheme before the end of 2019.

He said that the beneficiaries  were selected, under the first phase of the programme at the Custom, Budum, Metro and Monday Markets in Maiduguri.

Zulum explained that each of the beneficiaries would receive N30, 000, to finance businesses, adding that government had evolved proactive measures to ensure continuity and sustainability of the programme.

According to him, the state government will provide 50 per cent waver on the facility to each of beneficiary that repaid the loan within one year.

Zulum said: “During electioneering campaign, I promised to address the nagging problem of unemployment among youths and women.

“The state government accords priority to the improvement of social and economic condition of the people to achieve security, peace and stability in the state.”

He also said that his administration had initiated viable programmes to provide financial and technical support, to encourage the growth of SMEs, create job opportunities, reduce poverty and enhance wealth creation in the society.

Zulum revealed that government had also initiated legislative process to review the operational framework of the Borno Investment and Borno Market Companies, to enable them meet the challenges of modern economic societies.

The governor tasked the Ministry of Poverty Alleviation to put up effective supervision of the scheme and called on the beneficiaries to ensure effective utilisation of the money and engage in productive activities.

Also speaking, Hajiya Aisha Abdulrahaman, the Acting Permanent Secretary, Ministry of Poverty Alleviation said effective modalities had been put in place to ensure sustainability and mobilise participation in the programme.

Two of the beneficiaries, Mrs Lami Mohammed and Ali Yanaye, lauded the gesture, adding that it would go a long way to improve their social and economic well-being.