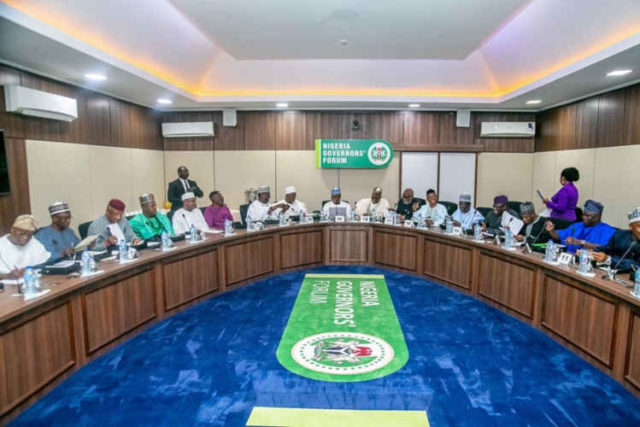 The 36 state governors are heading to the courts over the decision of the Nigerian Financial Intelligence Unit (NFIU) to strip them of their hold on the State Joint Accounts.

The governors met in Abuja on Thursday and rejected a political solution to the disagreement with the NFIU over the Local Government statutory allocations from the Federation Account.

They insisted that the NFIU Act 2018 lacks the power  to issue guidelines on local government finances, especially imposition of sanctions.

It was learnt that the governors chose legal battle than political resolution in order to “lay the matter to rest once and for all.”

They also argued that political option would amount to conferring legitimacy on “assumed powers by the NFIU which may set a bad precedent.”

A governor, who spoke in confidence, said: “Initially, we thought of prevailing on the presidency to broker talks between the Nigerian Governors Forum (NGF) and the NFIU because we are also committed to probity and accountability.

“When we met, all governors agreed that the NFIU guidelines are unconstitutional and we should not use political rapprochement to confer legitimacy on the assumed powers of the agency. We have realized that the issues at stake border on the provisions of the 1999 Constitution.

“All the governors have resolved that we should take the battle to the court for a clear cut decision which will guide the present generation of governors and their successors.

“If you look at Section 7(6) (a) and (b) of the Constitution, it gives the National Assembly and the State House of Assembly the powers to make provisions for statutory allocation of public revenue to the local councils in the Federation and within the State respectfully.

“Section 162 (6) makes provision for the creation of the State Joint Local Government Account (SJLGA) into which shall be paid all allocations to the LGAs of the State from the Federation Account and from the government of the state.

“Section 162 (7) of the Constitution empowers the National Assembly to formulate the terms and manners in which funds from the SJLGA may be disbursed.

“In Section 162(8), the 1999 Constitution mandates the State House of Assembly to prescribe the manner in which the amount standing to the credit of the local councils in the state shall be distributed.”

“We see the whole matter as constitutional; we prefer to go to court instead of sleeping over our rights.”

Another governor said: “Our position is that the guidelines are illegal, unconstitutional and cannot be binding on state governors.

“Some of us tried as much as possible to prevail on the presidency to broker peace between the Governors’ Forum and the NFIU but the latter was not forthcoming.

“At our meeting, we realized that we have a strong case. We will fight to the end. The beauty of democracy is that the judiciary is the arbiter.

“If we have an under-the-table deal with the NFIU, it will backfire later. We won’t follow this path.

“This is not the first time we are going to court. During the administration of ex-President Olusegun Obasanjo, the Excess Crude Account (ECA) was created and the governors challenged it because it was illegal.”

The NFIU, in guidelines effective from June 1, banned banks, governors other financial institutions, public officers and relevant stakeholders from tampering with the statutory allocations of Local Government Areas from the Federation Account.

Some of the sanctions are possible blacklist of errant governors and the Chief Executive Officers of the affected banks, a complete shutdown of any bank and watch-list of violators in 160 countries where they cannot transact business or pay bills.

The agency also imposed a daily N500, 000 cash transaction limit on all the 774 local governments in the country.

The guidelines restored the financial autonomy of the local governments.

Thus, each local government is free to spend its funds without taking directives from state governors who had hitherto hijacked the monthly allocations of the third tier of government under the guise of State Joint Local Government Account.

The governors however asked President Muhammadu Buhari to call the NFIU to order because, according to them, the guidelines are in violation of the 1999 Constitution.

They accused NFIU of stoking mischief and also deliberately seeking to cause disaffection, chaos and overheat the polity.”

It was learnt that despite their letter to the President, NFIU has been giving state governors a tough time through what a governor described as “intimidation of our bankers.”

The governors chose to go to court.

‘How We Were Paid to Drag Gov. Bindow to Court for Certificate Forgery’ –...