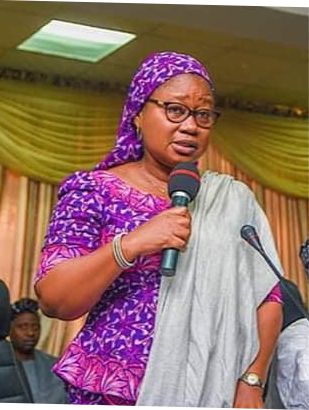 The chairman Adamawa first initiative, Ibrahim Luka told Journalists in Yola on Friday that the Acting Vice Chancellor of ADSU Mubi, Prof. Kaletapwa George Farauta stood out from other contestants going by her resourcefulness.

The acting Vice Chancellor, Prof. Kaletapwa George Faruta had thrown her hat into the contest for the office of the Vice Chancellor having piloted the affair of the university for about three years without rancour

Ibrahim Luka, State Chairman, Adamawa First Initiative, told Journalists in Yola on Thursday that the Acting VC stood out from other contestants going by her resourcefulness.

Ibrahim said Kaletapwa’s purposeful leadership for about three years and the peace her leadership brought to the university for the past two years is immeasurable and that her pledge to bring more transformation in ADSU if given the chance in 2020, is worthy of note.

“Kaletapwa knows the key role resilience and steadfastness play in the development of ADSU, Mubi and her pledge to take the university to a greater height in spite of the meagre resources available to her for about two years today, we commend her leadership in the university, especially in the area of IGR rejuvenation under watch.

He noted that the emergence of Kaletapwa in 2020 as substantive VC would not benefit only the university but also the state in general.

Ibrahim commended Kaletapwa led leadership for a successful and purposeful leadership in ADSU.

He said that no stone would be left unturned in ensuring that Kaletapwa is return to continue the good work she has started.

“I commend the management team working with her for not letting us down.

“We have started mobilising academia across Adamawa and I know that victory is sure because we have formidable candidates to sustain the success recorded so far in ADSU,” he said.

The Finder reports that the university governing council announce list of 25 candidates jostling for the seat of the Vice Chancellor of the state university in Mubi.