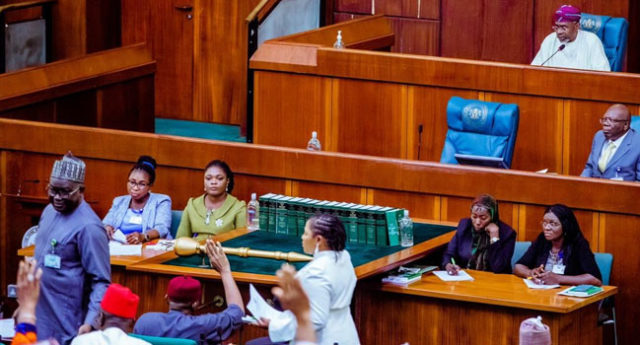 The House of Representatives has invited the leadership of the Academic Staff Union of Universities (ASUU) and the Ministries of Labour and Education, over the ongoing warning strike by members of the union.

This formed part of the resolutions reached during Tuesday’s plenary following a motion of urgent public importance raised by a member of the chamber, Dachung Bagos.

Bagos said there was an urgent need for the House to intervene in the rift between the Federal Government and ASUU over the Integrated Payroll and Personnel Information System (IPPIS) and other underlying issues.

Other lawmakers decried that if the issue was not resolved, ASUU would embark on an indefinite strike at the end of the warning industrial action.

They described the strike as a national embarrassment, saying the students were always at the receiving end when the lecturers go on strike.

Meanwhile, the House has resolved to set up an ad-hoc committee to investigate oil spill clean-ups and remediation in the oil-producing states in the last five years, and the activities of the National Oil Spill Detection and Response Agency.

The resolution followed a motion by Abubakar Fulata who raised concern that the annual report of the Department of Petroleum Resources (DPR) indicated that 569 incidents of oil spills were conveyed with 9718.22 barrels spilled.

He noted that only 800.55 barrels were recovered while thousands of barrels of oil were lost to the environment.

In their various contributions, the lawmakers were worried that the oil-producing communities continued to complain of belated joint investigative visits, inadequate oil spill clean-up and remediation, thus exacerbating the woes of the polluted communities and the negative impact on the environment.

The motion was, thereafter, referred to the ad-hoc committee and asked to report back within eight weeks for further legislative action.

Adamawa APC thanks PMB for reappointing Boss Mustapha as SGF