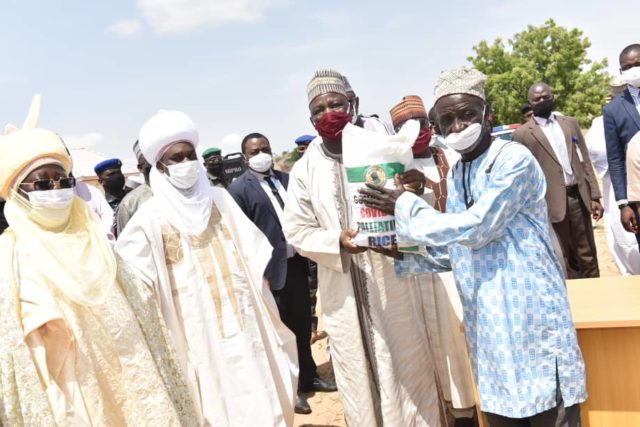 Governor Muhammadu Inuwa Yahaya of Gombe State has flagged-off the distribution of Palliatives and Relief materials to the less privileged members of the society across the state.

The flag-off ceremony took place in Boh the headquarters of Shongom Local Government Area of State.

Governor Inuwa Yahaya who was represented at the ceremony by the State Deputy Governor, Dr. Manassah Daniel Jatau, said the palliative package targets to reach 30 less privileged individuals in each of the 2218 polling units across the State, translating to about 66, 000 households or 400,000 individuals.

The items include rice, maize, Millet, sugar, spaghetti, macaroni,cooking oil, salt among others.

He said the items were made up of donations received from the Federal Government and Northeast Development Commission, as well as those supplied by the Gombe State Government

The Governor said his administration is mindful of the hardship occasioned by the Coronavirus Pandamic, hence the decision in setting up of the palliative committee to strategically come up with modalities and undertake the distribution to ensure that the items get to the intended beneficiaries.

Governor Yahaya said his administration will continue to spare no effort in ensuring the welfare of the people through the formulation of policies, programmes as well as initiatives that will give the people a sense of belonging and bring Government closer to them.

He noted that since the palliative will not get to every citizen of the State, those that are privileged to have should be generous to share with neighbours in the spirit of brotherhood.

He said the palliatives will get to the intended beneficiaries irrespective of political parties.

The Chairman, Gombe State Relief and Palliative committee and Emir of Gombe, Alhaji (Dr) Abubakar Shehu Abubakar lll said his committee came up with sub-committees to ensure that the items get to the intended beneficiaries and get all classes of people to whom the palliative are meant for are well captured and attended to.

He assured the Governor that the palliative committee will ensure that the relief materials get to over sixty six thousand less privileged households across the State.

A total of two thousand seven hundred and ninety households in Shongom Local Government Area have each received a bag of rice and millet carton of macaroni, vegetable oil and salt.

Suspension of Adamawa APC primaries: Group Appeals to Buhari to call his in-law to...