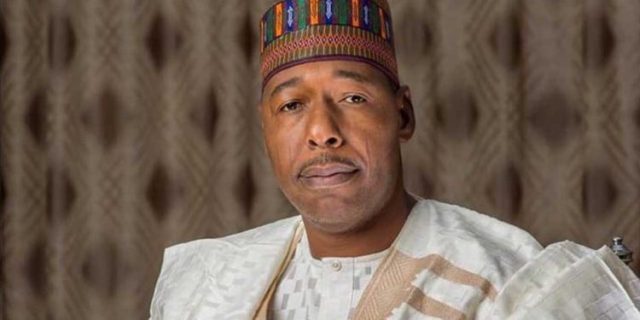 Most senior officials overseeing the affairs of six of the  local government areas in Borno were absent when Gov. Babagana Zulum conducted  roll calls  during an unscheduled visit to their secretariats.

The the affected local governments are: Chibok, Konduga, Bama, Askira/Uba, Damboa and Gwoza.

At Gwoza, the newly constructed council secretariat was under lock and key.

The governor’s spokesman, Mallam Isa Gusau, said  that those absent during the governor’s just concluded three days’  monitoring tour of projects and quality of governance at the grassroots comprised secretaries, heads of department, directors and other top-ranking officials.

Gusau in a statement he issued  on Friday said, “None of the heads of department was around, neither the Secretary nor the other principal officers  reported for  duty.

“Look at the Secretariat; termites all over, an indication that nobody is operating in the Secretariat. Government cannot allow this situation to continue.

“We came from Maiduguri to determine the presence of senior public servants at their places of work.

“We have been pleading with them for quite sometime, to be operating from these local government areas so that citizens will feel the impact of governance at the grassroots but from all indication, many are not listening.

“We will take punitive measures because we cannot allow this system to continue” Gov. Zulum was quoted as saying in the statement.

The governor, however,  met with  the traditional rulers of Bama, Askira, Gwoza and Uba in their respective palaces.

He lauded and urged them to sustain the tempo of ensuring that their subjects continue to  live in peace and harmony.

In Bama, Zulum announced that any house in Bama not occupied in two weeks would be temporarily allocated to the  Internally Displaced Persons (IDPs)  pending when the owners would be  ready to occupy them.

But for Saraki’s leadership, National Assembly would have been in chaos – Jonathan