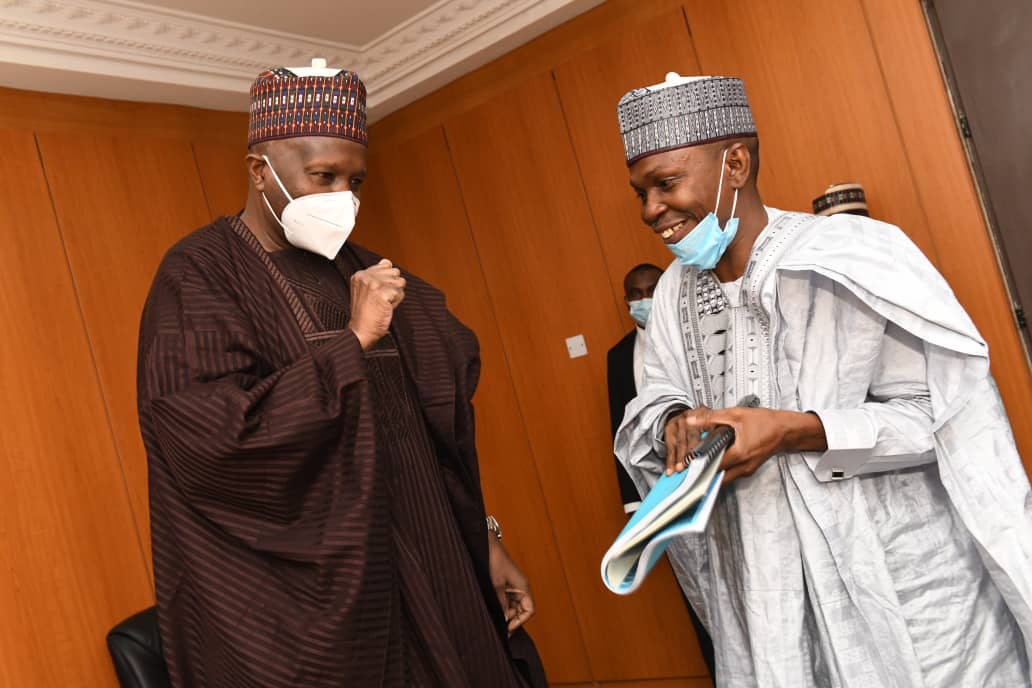 Governor Muhammadu Inuwa Yahaya has urged the principal officers of the newly established Federal Polytechnic Kaltungo in Gombe state to put in their wealth of experience into practice while discharging their new responsibilities.

Governor Yahaya made the call while receiving the principal officers of the polytecnic led by its rector, Dr. Muhammad Suleiman Lame who paid him a courtesy call at a council chamber.

He said Gombe state government is committed to partnering with the polytechnic with a view to ensuring smooth take off and running of the federal institution.

While thanking the federal government for finding Gombe state suitable, the governor said establishing the federal polytechnic in Gombe will go along way in promoting technical education among the youths in the state, northeast sub region and the nation as a whole.

He said aside providing temporary site for the polytechnic’s take off at Kaltungo model secondary school, his government has already allocated 100 hectares of land where permanent site will be sited.

The Governor further assured the polytechnic’s management team of Government’s support at all times.

He said his cabinet is composed of experienced academics, some of whom are from Kaltungo, citing as examples, the Secretary to the state Government, Professor Ibrahim Abubakar Njodi who was the Vice Chancellor of the University of Maiduguri, Commissioner of higher education, Meshack Lauco who worked with federal polytechnic Kauran Namoda in Zamfara state. He said the new management can count on the experience of these distinguished academics and his support as they pilot the affairs of the institution.

In his remarks, Dr Muhammed Suleiman Lame, said the principal officers of the polytechnic were at the Government House to formally introduce themselves to the Governor and to seek for government’s support and assistance towards the smooth take off of the federal polytechnic.

While appreciating the key role Gombe state government played in the buildup to the establishment and the locatiom of the institution, the rector said his administration will ensure synergy with the government and will keep it up to speed with its progress at all levels.

Dr. Lame solicited for the assistance of the state government in the provision of temporary accommodation for the principal officers and utility vehicles.

Earlier in his remarks, Bauchi state commissioner for education, Dr. Aliyu Tilde who led a team from Bauchi on a solidarity with the rector said establishing the federal polytechnic in Gombe state is a move in the right direction.

He assured Governor Muhammadu Inuwa Yahaya that Dr. Lame will accord him all the desired support for smooth running of the institution.

Dr. Tilde informed Governor Yahaya that Dr. Lame had performed greatly through execution of rapid developmental projects than his predecessors when he was the rector at the Abubakar Tatari Ali polytechnic, Bauchi and is resolute to sustain a similar tempo here in Gombe.

Also speaking, the Sarkin Yakin Bauchi, Aliyu Yakubu Lame who presented the new rector to the Governor on behalf of the Emir of Bauchi, Alhaji Rilwanu Suleiman Adamu, guaranteed Gombe state government of their son’s determination for a harmonious working relationship for the successful operation of the infant instituition.

Highlight of the visit was the formal presentation of the title documents of the lands allocated to the polytechnic by Governor Inuwa Yahaya to the rector, Dr. Suleiman Lame.