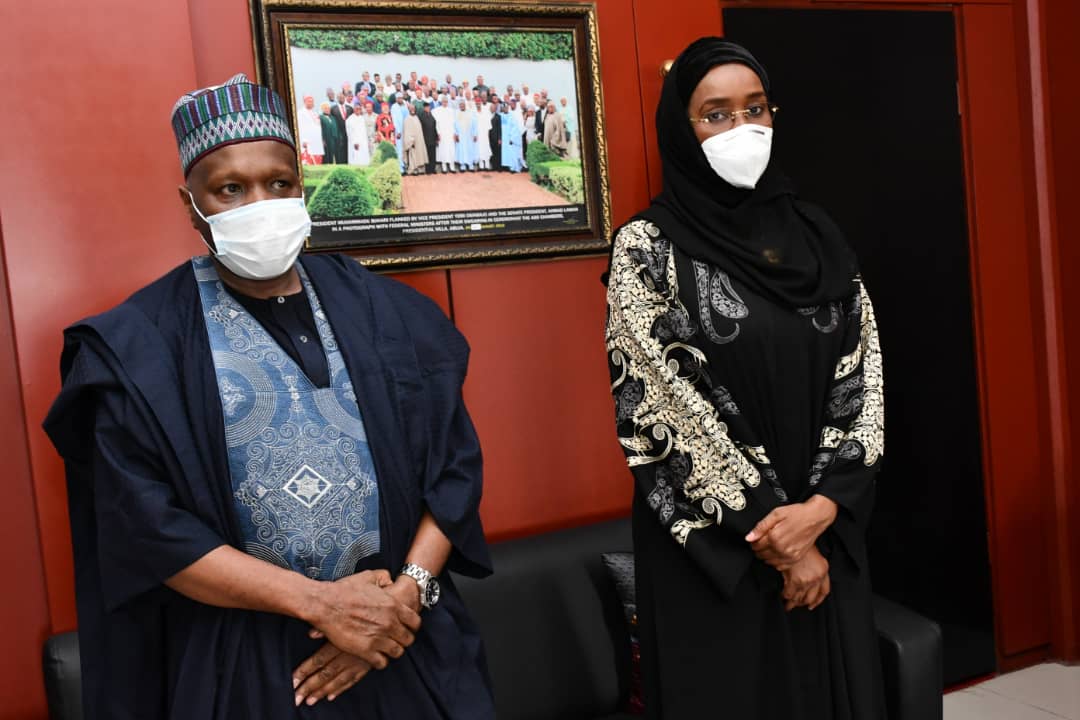 Gombe State Governor, Alhaji Muhammadu Inuwa Yahaya has sought for the support and collaboration of the Federal Ministry of Humanitarian Affairs, Disaster Management and Social Development in his determination to strenthen the state’s social inclusion and protection programmes.

The Governor was speaking when he paid a courtesy visit on the Minister, Hajiya Sadiya Umar Farouk in her office in Abuja.

He explained that going out of the the covid-19 pandemic, his administration is desirous to come up with measures to encourage small and medium scale businesses, especially in Agriculture to strengthen the safety net and mitigate the effects of the pandemic on the socio-economic activities of the people and other challenges bedevilling the state as a result of insurgency in the North- East.

He said “Gombe, being at the center of the North-East subregion is experiencing the influx of people fleeing insurgency in the neighbouring states, thereby overstretching the state’s resources in the process”.

The Governor however, lamented the non inclusion of Gombe among the frontline states when it comes to humanitarian support and intervention for states affected by the insurgency despite the huge burden it has to contain with as a result of conflict in the region.

Governor Yahaya who commended the ministry’s school feeding programme and its efforts to feed school children at home during the Covid-19 period through the Take Home Rations (THR), also made a case for the expansion of the school feeding programme in Gombe state to accommodate the rising enrollment figures as a result of the state of emergency he declared on education.

On the social investment programme of the ministry,
the N-Power in particular, the Governor pushed for special consideration for Gombe state in the ongoing recruitment process, lamented that the state had only about 2,000 beneficiaries in the outgoing batches.

Governor Yahaya also emphasized the need to expedite the roll out of the Government Enterprises and Empowerment Programme ( GEEP) in Gombe State in order to accelerate the economic recovery post-Covid, saying Gombe is a commercial area with large numbers of businesses and traders that need to benefit from the intervention.

In her response, the Minister, told the Governor that her ministry will continue to prioritise Gombe state in its activities, assuring to include the state among the frontline states in the North-East region.

She thanked Governor Yahaya for his support to the Ministry’s social intervention programmes such as Conditional Cash Transfer, N- Power, Government Enterprises Empowerment and Home Grown School Feeding among others.

She said her Ministry, which was established in August 2019 by President Muhammadu Buhari, is charged with the responsibility of providing effective coordination of humanitarian interventions, ensuring disaster mitigation, preparedness and response as well as implementing social Inclusion and protection programmes, seeking for the Governor’s continuous cooperation to the ministry in implementing its mandate within the state.

Hajiya Sadiya Farouk expressed appreciation to Gombe state Government for its support to the ongoing rehabilitation and radicalisation of repentant insurgents by the operation safe corridor at the Malam Sidi camp.

She said with the succeses recorded and the state Governor’s commitment, the National Commission for Refugees Migrants and Internally Displaced Persons (NCFRMI) is putting plans to set up an operational office in Gombe state and that more support is coming the way of Gombe through her Ministry.

The Minister also disclosed that NEMA will be engaging Gombe SEMA and other states emergency agencies to ensure preparedness to prevent and manage disasters, especially with the early warning signals, seasonal rainfall prediction and annual flood outlook earlier released.