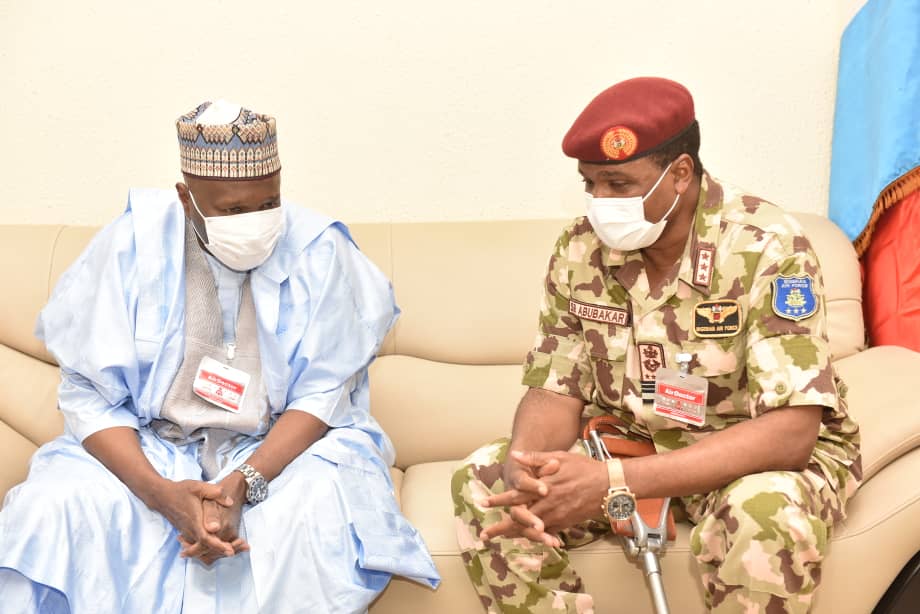 Performing the ceremony alongside the Chief of Air staff, Governor Inuwa Yahaya said the speed at which the 203 Reconnaissance group is being established in Gombe is a reflection of the quality of leadership of the Nigerian Airforce under the watchful eyes of Air Marshal Sadiq Baba Abubakar.

“I notice with keen interest the effort put in place to actualise the establishment of the combat Reconnaissance group as fast as possible, the land was allocated in August 2020 and today we are all here to witness the ground breaking ceremony”.

He commended the steadfastness of the Chief of Air staff towards the establishment of the Reconnaissance group in Gombe calling on officers and men of the Nigerian Airforce to maintain team spirit as they battle insurgency and other forms of criminality.

The Governor thanked President Muhammadu Buhari for approving the establishment of the 203 combat Reconnaissance group despite the economic meltdown prompted by the covid-19 pandemic.

” Let me seize this opportunity to commend and thank our dear President, who despite the economic challenges occasioned by the covid-19 pandemic has continued to provide the required support in the fight against Boko Haram, banditry and other forms of criminality.

” I equally commend members of the National Assembly for appropriating and approving the funds for the construction of this base”.

The Governor said the Geographical position of Gombe State in the North East places it at a strategic position for the citing of the Reconnaissance group of the the Nigerian Airforce in the State.

He said the operational base will further boost the management of security in Gombe, the North-East and the country as a whole, adding that without security nothing can fundamentally be achieved.

Governor Yahaya said his determination to partner with the Nigerian Airforce towards the establishment of the 203 Combat Reconnaissance group in the State was demonstrated in the prompt allocation of 230 hectares of land for the project, reiterating that Gombe is ready to host officers and men of the force.

The Governor assured the Nigerian Airforce of his administration’s unflinching support as well as the cooperation and understanding of the people of the State towards the full operation and continuous stay of the group.

He thanked President Muhammadu Buhari for his pragmatic leadership in supporting the expansion of the Nigerian Airforce and Governor Inuwa Yahaya for his zeal and determination towards the establishment of the base in Gombe.

Air Marshal Abubakar disclosed that prior to the coming of the administration of President Muhammadu Buhari, the force had only two units in Yola and Maiduguri but that at present NAF has established units in virtually all the states within the North-East sub-region.

He informed the Governor that men and platforms have already been deployed to the forward operational base in Gombe and will begin engagements with the State Government for a successful commencement of operations.

” Let me also note that the establishment of this Base in Gombe is yet another clear testimony of the Federal Government’s commitment to overcoming the security challenges in the North East and indeed the entire country.

” The Unmanned Aerial Vehicles that would be deployed here at the 203 Combat Reconnaissance Group, along with Force Protection component and other support elements, will undoubtedly bring new capabilities to the spectrum of operations of the Service thereby further enhancing our ability to contain the threats to our communities and citizens. The Commander, as well as the first set of personnel to man the Unit, are already posted to Gombe and, in the days and weeks ahead, they will work with the State Government to ensure that the Group is ready to commence active operations in the shortest possible time”.