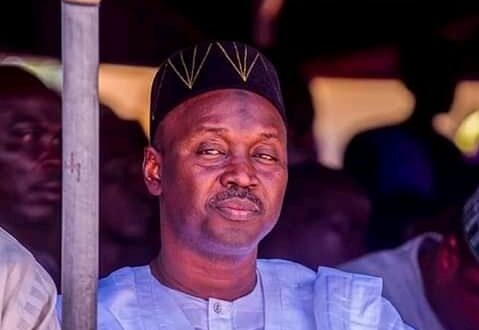 At a press conference in Yola ‎, the ACG, through its Convener, Dr. Bappare Mohammed and Deputy Convener, Paul Silas, sympathised with the people of Yola north, Yola south south and Giriei for the display of clumsiness by Rep. Jafaru Ribadu since he was declared by the supreme judgment that sacked Modibbo Girei that have the mandate of the electorates.

The group in an open letter to Rep. Jafaru, dated September 15, 2020 described as unfortunate a promising year like 2020 which has been cut short for many families through leadership incompetence since his inauguration into the House of Representative.

Bappare said: “For members of the Adamawa Conscience Guard, we have watched with utter dismay and disillusionment, the unfortunate and prevailing clumsiness of Jafaru Ribadu in the three local governments that make up his constituency,  “However, we can no longer subscribe to your futile arguments or even tolerate your grandstanding on the lack of any tangible constituency  projects delivered to the people apart from the wooden canoe you brandished on social media as projects, which your leadership has clandestinely exploited in Adamawa state for obvious political reasons.

“We are no doubt perplexed that in spite of the frightening dimension your leadership cluelessness has assumed, you are still playing the dangerous game of political correctness, instead of looking inwards to retrace your steps or correct your commissions or omissions which have apparently exacerbated the hunger crisis your incompetence has brought on the members of your constituency.”

The group accused the Rep. Jafaru of abandoning his constituents since he lacks knowledge of rigorous campaign as a result of his declaration by the Supreme Court.

The group said Rep. Jafaru has failed the people of his constituency and Adamawa state generally in defending their interest in the national assembly. “Time is extremely overripe for you to do the needful by honourably resigning your position as the member representing Yola north, Yola south and Girei without further delay.

The group, in addition, asked Rep. Jafaru to, before resignation, render account of the millions of naira he collected as constituency projects, which has accrued to his constituency, since he was declared by the Supreme Court. This, the group said, is necessary because the said mandate given to him through the court have been abused.