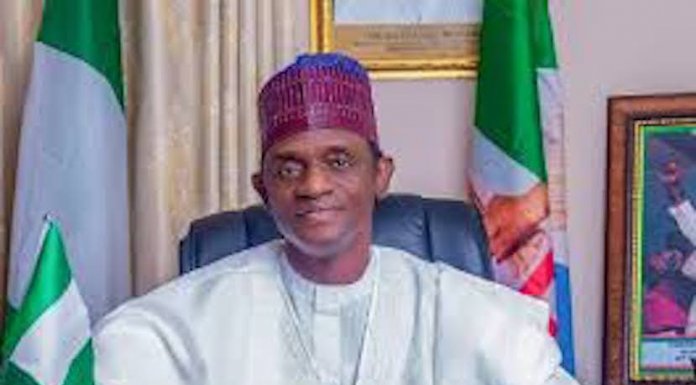 A Chieftain of the All Progressive Congress (APC) in Adamawa state has hailed the state’s transformation under Governor Mai Mala Buni, describing it as magical and dumbfounding.

Dr Bappre, an APC chieftain and youth leader in the state, spoke in an interview in Yola, the state capital.

The ruling party supremo said he was moved to commend Buni despite being an Adamawa indigene.

Bappare who was a former principal secretary to the immediate past Governor of Adamawa state, Senator Jibrilla Bindow said he was marvelled with the level of infrastructural development witnessed in the state when he visited after a long absence’.

“My eyes saw what I never imagined to see how a manhandling the party affairs at the national level still governed Yobe effectively without blemish; I battled with my conscience in making this feeling known to the world.

The former principal secretary to Bindow said he never imagined to see more than standard classrooms, airport, ultramodern transit park, the largest maternity and newborn complex and mega projects about to be completed.

“When I toured Yobe at night, I did not use the headlamps of my vehicle because functional streetlights, have been installed almost in every part of the city and I do not know anywhere in Nigeria where almost all the roads in the capital have been reconstructed – the majority on concrete.

He said the roads were constructed with properly designed drainages as the most astonishing thing was the ultra-modern market complex.

According to him, “This is pure demonstration of sagacity and political will which is very uncommon among our political leaders and having been involved in Yobe politics since its state’s creation in 1991, I know that past administrations tried unsuccessfully to build airport and modern market.”

Bappare said the new ultramodern primary schools being constructed by the governor is world-class as he took the developmental strides to another level by ensuring that other parts of the state also received the same infrastructural facelift.

“The second-ranked most developed town in the state—Geidam has been turned into a ‘mini’ capital with concrete roads everywhere while Buni Yadi, which is also in the ranking has also been given a huge facelift,” he said.

He said all the 17 local government areas of the state had witnessed road construction with concrete and this is what even we thought was impossible.

“It might be needless to talk about Buni Yadi LGA which is also the governor’s home as the areas have been turned into ‘small London’ before everyone’s eyes.

Bappare added that though his assessment might not ‘go down well’ with the opposition party in the state, it was time Nigeria was salvaged with leaders and the led, to tell the truth despite affiliations to Yobe state.

The APC chieftain also said, “Nigeria’s problem majorly stems from the fact that political parties and their members will not see anything good in a ruling-government which they do not control.”