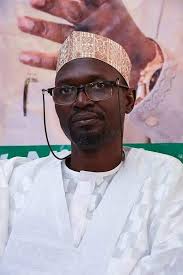 The Coalition of Fintiri support group has called on Governor Ahmadu Umaru Fintiri of Adamawa state to sack the secretary to the state government, Bashir Ahmad, over his inability to pilot the office of the SSG, Adamawa state.

The group in a statement by its National Convener, Comrade Muhammed Ishaq, on Friday said the actions and the behaviour of Bashir Ahmad has brought odium and ridicule to the office of the SSG as they wonder how governor Fintiri appointed a person that lack public relations and political cohesion to the exalted office of the SSG.

The alleged erratic behaviour of Bashir Ahmad and lack of respect for anyone is tantamount to affront on the sensibility of Adamawa electorate, particularly government officials complained bitterly how they were treated with disdain by Bashir Ahmad on every encounter with the SSG.

The statement reads, “We, as a coalition that represents millions of Fintiri support group, are pained to witness a blatant display of extravagance and ridiculing of anyone that comes in contact with the SSG.

“Considering the position Bashir Ahmad is occupying as the policy director of the state government of Adamawa and someone who is expected to display maturity in every dealing with the public, it is unbecoming of him to allow such irrational and reckless display of arrogance by the SSG when it comes to interface with the public and government officials.

“If Bashir Ahmad is endowed with moral conscience, we ask him to honourably resign as his continued stay in the capacity of the secretary to the state government is synonymous with celebrating grossness and recklessness in governance.”

The group further called on Governor Fintiri to immediately relieve Bashir Ahmad of his position and appoint a bridge builder to liaise with government officials and the public on behalf of the governor.

It added, “We also call on Fintiri to act fast as continuous stay in office by Bashir Ahmad will be an albatross to Fintiri’s re-election in 2023.

“In the circumstance, Bashir Ahmad fails to resign within 14 days, our coalition has no option but to mobilise our members for a state-wide protest to press home our demands as we cannot watch the governor loose re-election due to the irrational behaviour of the SSG.

“The above call and stance are made in the best interest of the all, as Fintiri’s lovers have to stand up against this ugly menace of the SSG before it consumes us all.”