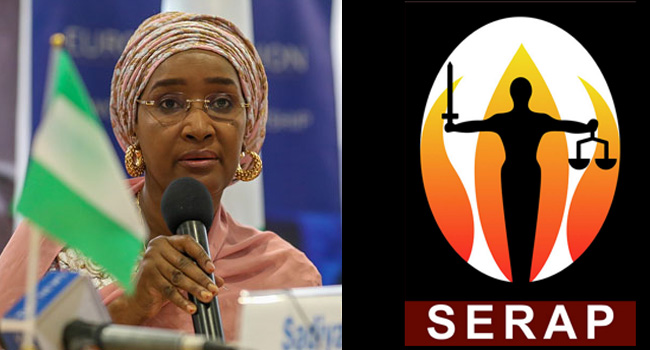 Socio-Economic Rights and Accountability Project (SERAP) has asked the Minister of Humanitarian Affairs, Disaster Management and Social Development, Sadia Umar-Farouk to publish details of the proposed payments of N729bn to 24.3 million poor Nigerians for six months.

The non-governmental organisation also wants the minister to provide details about the mechanisms and logistics for the payments, list of beneficiaries, how they have been selected, projected payments per state, and whether the payments will be made in cash, through Bank Verification Numbers or other means.

SERAP’s request follows the announcement by the minister last week that the Federal Government would pay about 24.3 million poor Nigerians N5,000 each for a period of six months.

She had disclosed the plan at the inauguration of the Federal Government’s emergency intervention database for the urban poor, saying the payments would serve as a cushion for those further impoverished by the COVID-19 pandemic.

But SERAP is demanding an explanation of the rationale for paying out the amount, which it says translates to five-per cent of the country’s budget of N13.6 trillion for 2021.

It also wants to know if the proposed spending is part of the N5.6 trillion budget deficit.

In the Freedom of Information request dated 23 January 2021 and signed by SERAP deputy director Kolawole Oluwadare, the organisation said, “Publishing the details of beneficiaries and selection criteria, as well as the payment plan for six months, would promote transparency and accountability, and remove the risks of mismanagement and diversion of public funds.

“Transparency and accountability in the programme would improve public trust, and allow Nigerians to track and monitor its implementation, and to assess if the programme is justified, as well as to hold authorities to account in cases of diversion, mismanagement and corruption.”

To improve transparency and accountability, SERAP believes it is important for the minister to get the Economic and Financial Crimes Commission (EFCC) and Independent Corrupt Practices and Other Related Offences Commission (ICPC) to jointly track and monitor the payments.

It is giving the government seven days from the receipt or publication of its FoI request to grant it.

“If we have not heard from you by then, SERAP shall take all appropriate legal actions under the Freedom of Information Act to compel you to comply with our request,” the NGO said in a statement by its Deputy Director, Kolawole Oluwadare, on Sunday.

SERAP explained that although the provision of support and assistance to vulnerable Nigerians is a human rights obligation, the amount involved (five per cent of the 2021 budget) requires anti-corruption safeguards.

Having such safeguards, according to it, will “ensure the payments go directly to the intended beneficiaries, and that public funds are not mismanaged or diverted”.

“SERAP notes that the Nigerian Constitution of 1999 [as amended], UN Convention against Corruption, and African Union Convention on Preventing and Combating Corruption to which Nigeria is a state party require the government to set the highest standards of transparency, accountability and probity in programmes that it oversees,” it said.

“The government has a responsibility to ensure that these requirements and other anti-corruption controls are fully implemented and monitored and that the payments are justified in light of the huge budget deficit and borrowing, and whether there are better ways to spend N729bn to support poor Nigerians.”