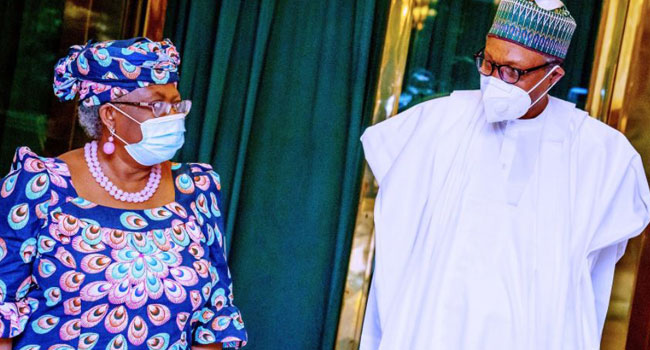 President Muhammadu Buhari says he has no doubt that Nigeria’s former Finance Minister, Ngozi Okonjo-Iweala will excel in her new position as Director-General of the World Trade Organisation.

Following the confirmation of her appointment on Monday, President Buhari on behalf of the Federal Government and all Nigerians, warmly felicitated with Dr. Okonjo-Iweala on her election which he says is bringing joy and more honour to the country.

“As the Harvard-educated and renowned economist takes up another onerous task of service to the world and humanity, the President believes her track record of integrity, diligence, and passion for development will continue to yield positive results and rewards to mankind,” the President stated.

According to a statement by his special media aide, the president affirmed that Dr. Okonjo-Iweala, who over the years set major records of economic reforms in Nigeria as Minister of Finance, and later Minister of Foreign Affairs, will excel in her new position and validate the global mandate of repositioning and strengthening the multilateral institution for the greater good of all.

The President joined the family, friends, and colleagues in wishing Dr. Okonjo-Iweala well in her new endeavor.

on Monday, Dr. Okonjo-Iweala became the first woman and the first African to lead the international trade body. Her term is scheduled to start on March 1.

“On behalf of the General Council, I extend our warmest congratulations to Dr Ngozi Okonjo-Iweala on her appointment as the WTO’s next Director-General and formally welcome her to this General Council meeting.

“Dr Ngozi, on behalf of all members I wish to sincerely thank you for your graciousness in these exceptional months, and for your patience.

“We look forward to collaborating closely with you, Dr Ngozi, and I am certain that all members will work with you constructively during your tenure as Director-General to shape the future of this organization.”

Quoted in a WTO statement, Dr Okonjo-Iweala said a key priority for her would be to work with members to quickly address the economic and health consequences brought about by the COVID-19 pandemic.

“I am honoured to have been selected by WTO members as WTO Director-General,” she said.

“A strong WTO is vital if we are to recover fully and rapidly from the devastation wrought by the COVID-19 pandemic.

“I look forward to working with members to shape and implement the policy responses we need to get the global economy going again.

“Our organization faces a great many challenges but working together we can collectively make the WTO stronger, more agile, and better adapted to the realities of today.”

South Korean Trade Minister Yoo Myung-hee had been the only other remaining contender for the post but pulled out when it became clear that new US President Joe Biden was swinging firmly behind Okonjo-Iweala’s candidacy.

The organisation has been leaderless since Brazilian career diplomat Roberto Azevedo stepped down last August, a year ahead of schedule.

The process of picking one of eight candidates to succeed him had been expected to wrap up by November, but the administration of former US President Donald Trump blocked the consensus to appoint Okonjo-Iweala.

Okonjo-Iweala, who boasted US, EU and African backing, was not at the WTO’s Geneva headquarters for Monday’s meeting but was scheduled to hold an online press conference after its conclusion.

She will take over an organisation mired in multiple crises and struggling to help member states navigate the severe global economic slump triggered by the coronavirus pandemic.

Okonjo-Iweala argued during the race that she was best placed out of the eight candidates for the post to steer the WTO through the crises, calling herself a reform candidate.

She warned that growing protectionism and nationalism had been spurred on by the pandemic and insisted barriers needed to be lowered to help the world recover.

Even before Covid-19 battered the global economy, the WTO was weighed down by stalled trade talks and struggled to curb trade tensions between the United States and China.

The WTO also faced relentless attacks from Washington under Biden’s predecessor Donald Trump. Among other things, Trump brought the WTO’s dispute settlement appeal system to a grinding halt in late 2019.

Okonjo-Iweala has said her priorities include getting long-blocked trade talks on fishery subsidies across the finish line and breathing life back into WTO’s Appellate Body.

She has brushed off claims she lacks experience as a trade minister or negotiator.

She has portrayed herself as a champion against Nigeria’s rampant corruption — saying her own mother was even kidnapped over her attempts to tackle the scourge.

But her critics argue she should have done more to tackle it while in power.

She is on the Twitter board of directors and chaired Gavi, the Vaccine Alliance.