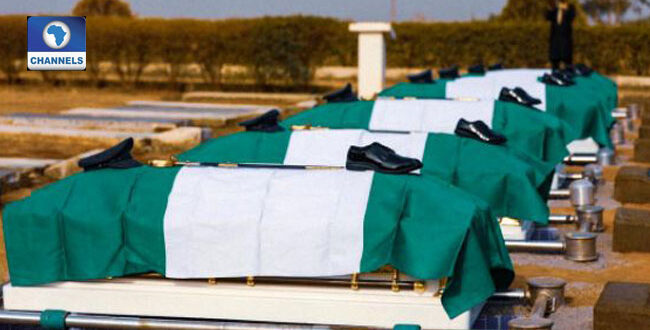 The burial ceremony of seven Airforce Officers who lost their lives on Sunday has commenced at the National Military Cemetery in Abuja.

The officers were crew members of the ill-fated Beechcraft King Air 350 that crashed at Bassa village near the Nnamdi Azikiwe International Airport while on a reconnaissance mission to Niger State.

A statement by the Director of Public Relations and Information of the Nigeria Airforce, Air Vice Marshal Ibikunle Daramola says the Aircraft reported engine failure shortly after take-off from Abuja and were on their way back to base when the crash occurred.

Present at the ceremony is the Minister of Defence, Bashir Magashi. Also Present are other Service Chiefs led by the Chief of Defence Staff, Major General Lucky Irabor.

The relatives of the late officers are also present at the cemetery where not an eye is left dry and the nation mourns the death of some of its finest soldiers.