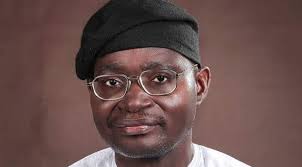 Under the auspices of Tabital Pulaaku International Fulani Socio-Cultural Association, the Fulani community has slammed the Senator representing Adamawa south in the Nigerian senate, Binos Dauda Yaroes, over his recent anti-Fulani statement he made on the floor of the senate penultimate week.

Last week, the Senator alleged that Fulani’s elite armed their pastoralist relatives to cause unrest and mayhem in Nigeria.

However, TPI, in a statement signed by its Chairman, Dr Murtala Aliyu forwarded to THE FINDER on Sunday, said the Senator should concentrate on giving his constituents credible leadership where people can pitch their tents instead of reacting to mundane issues and hauling insults those that made him who he is today.

“We are, however, surprised by the statement accredited to Senator Binos Dauda Yaroes linking Fulani elites to the social vices happening in Nigeria today.

“We consider the information made by the Senator representing Adamawa south, Bino Yaroes unfortunate, we have noticed with dismay that the Senator take particular delight in making a statement that is mundane and detrimental to the entire people of Adamawa south, himself as he has succeeded in making statement issued by him on the floor of the senate look childish.

“We are worried about the content of the statement credited to him and take exception to threat to our leaders. We are re-iterating for the umpteenth time that Binos Yaroe is a persona non grata who took delight in attacking the Fulani’s that made him all he is today.

“We most re-emphasize that the statement made by Bino Yaroe on the floor of the senate against the Fulani’s should be seen as his personal opinion as it does not in any way represent the position of the people of Adamawa south.”

“Similarly, the careless and hasty reference by Senator Yaroe that Fulbe elements were entirely responsible for kidnapping the District Head (Ardo) of Mayo Farang was baseless, as it was later discovered that the Senator’s tribesmen and relations were also deeply involved in the atrocity.

Incidentally, one of the cousins of the Senator (a son to his uncle) was found to be among the kidnappers of Ardo Mayo Farang.

This narrative bears ample testimony that crime cannot and should never be an exclusive preserve or practice of one ethnic group.

It is exceedingly ironic that a beneficiary of Fulbe hospitality like Senator Binos Dauda Yaroe could demonstrate such magnitude of ingratitude to the fingers, which fed him.

It is on record that the distinguished Senator spent seven of his teenage years at the home of Alhaji Usman Hamman-Yero Nyako, enjoying the lavish Fulbe hospitality, where he successfully acquired his primary school education.

And because of this reason, he adopted the family name of Hamman-Yero at primary school but cleverly shortened it to only ‘YERO’ afterwards.

However, as he grew older and his hate for the Fulbe also escalated higher, he decided to bastardize the name by turning it into ‘YAROE’. He interpolated the letter ‘O’ with an ‘E’ afterwards.

It is also on record that Fulbe inhabited his family home at Mararaba Tola in Mayo Belwa Local Government Area for over 600 years, which is nearly four centuries before the establishment of Adamawa Emirate.

Another record has it that the Senator’s father, who opened the first Church at Mararaba Tola, was substantially and consistently assisted with soft loans by the family of Hamman-Yero Nyako, which he later chose to denigrate”.

And when he decided to venture into politics, Senator Yaroe was facilitated into the game by Alhaji Sadiq Kalu. The famous Walin Ganye, The Walin Ganye, also introduced him to HE Atiku Abubakar, the former Vice President of Nigeria.

Since his entry into politics, Atiku Abubakar remained his political apron string, without whose support Senator Yaroe would have, hardly advanced as far as he got. Also, Professor Ahmed Modibbo single-handedly financed his political forays through the People’s Democratic Movement (PDM), sponsored and funded him entirely.

During his time as a lecturer of Economics at the defunct College of Preliminary Studies Yola, Professor Jibril Aminu facilitated the Senator’s employment with the Securities and Exchange Commission (SEC) of Nigeria.

It is also on record that the father of Senator Yaroe, who was credited for starting the first Church at Mararaba Tola, was substantially and consistently assisted with soft loans by the family of Hamman-Yero Nyako”.