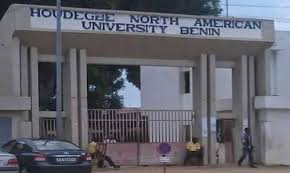 If you require a doctoral degree, go to the classroom, not “Cotonou chicken vineyard” honorary causa; Group tells Adamawa politicians.

A sociology-political group, the Adamawa Alliance for Good Governance (ADAFGG), has vowed not to resist plots by scammer deceiving politicians of Adamawa extraction of roadside honorary doctoral degree as scammers implore the state to fleece the political class of millions of naira in the name of bestowing them with honorary causa.

It said Adamawa would not return to Salisu Buhari’s days of obtaining a fake degree from Toronto University that was later discovered to be manufactured.

The group noted that it was disheartening that both elite and the unlettered politicians from Adamawa flock to a chicken vineyard called a University in neighbouring Cotonou to procure a fake doctoral degree from a chicken vineyard in Benin republic instead of sitting in the classroom to add such a title to their name if they so wish.

President of the Group, Mr Mohammed Abubakar, in a press statement, said the ADAFGG had received reports about plans by scammers from Adamawa and collaborators to evade the state at any moment from now to cajole politicians with the so-called “Cotonou doctoral degree”.

Abubakar stated that it was painful that rather than for our politicians to attend classroom if they need the title “Dr” to be attached to their names, they fall into the hands of scammers that arrange a hall for them in Benin republic claiming to be representative of such University to fleece the political class of millions of naira.

“Adamawa people must reject politicians who procure a fake doctoral degree, especially that of Cotonou that is on the prowl in Adamawa, as the level of proliferation of the title Dr has brought the real doctoral degree holders in disrepute.

“The quickest way to make money in Adamawa now is to scam the politicians by taking them to Cotonou and fleece them of chicken vineyard certificate”.

Like Loading...
Previous All You need to know about contributory pension scheme
Next BREAKING: Buhari Declares Zamfara State ‘No-Fly Zone’ Over Rising Insecurity