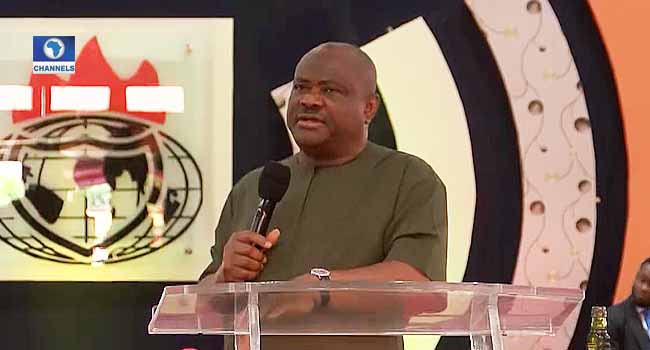 Wike Mocks Amaechi, Says ‘I Taught Him A Lesson In Politics’

The Governor of Rivers State, Nyesom Wike, says he has taught the Minister of Transportation, Rotimi Amaechi, a lesson in politics.

In a statement issued on Wednesday, his Special Assistant (Media), Kevin Ebiri, quoted the governor as saying despite Amaechi’s opposition to his political ambition, he has been able to get elected twice as governor.

He also accused the federal government of shielding Amaechi from prosecution for corruption.

Wike said the Federal Government’s action is appalling despite the Minister’s “inability to account for $308 million from the sales of the state-owned power plant and other critical assets when he was the Governor of Rivers State.”

The Governor said the protection Amaechi is getting is the reason why he has consistently made efforts to undermine the state government by “influencing who is to be posted as Commissioner of Police and General Officer Commanding of the Nigerian Army to Rivers State.”

“But let me warn the man who thinks he has President, he has soldiers, he has police. You should have learnt your lesson by now, that when God has left you there is nothing you can do again.”

Amaechi governed Rivers between 2007 and 2015 and Wike was one of his allies.

Wike had served as Amaechi’s chief of staff before he got appointed a minister of state for education.

He fell out with Amaechi in the buildup to the 2015 election.