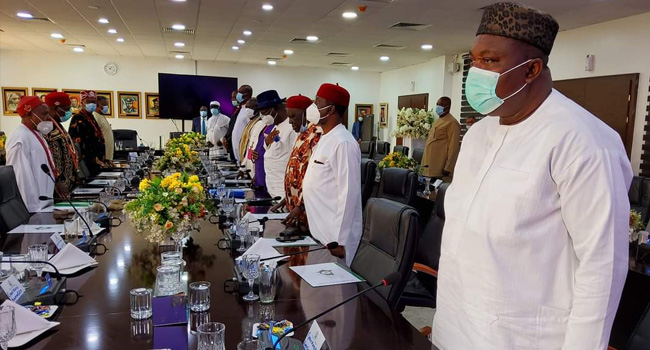 Governors in the southeast region are currently meeting at the Enugu Government House, in Enugu State.

The meeting may not be unconnected with the rising insecurity in the region.

Another issue that is likely to come up is the domestication of the regional security outfit, code-named Ebube Agu in each of the five states.

The outfit is meant to oversee and monitor the activities of vigilante groups in the southeastern part of the country.

This is the second time, the governors are meeting this month to deliberate on the safety and security of lives and property in the south-eastern region.

The meeting is coming barely 24 hours after gunmen attacked the resident of the Imo State Governor, Hope Uzodinma.

The gunmen were said to have invaded the governor’s village house in the early hours of Saturday.

Commissioner of Information in the state, Declan Emelumba, confirmed the attack to Channels Television via a telephone conversation.

He explained that the attack was repelled by a combined team of security operatives attached to the house.

“Gallant security operatives this morning repelled an attack on the Omuma country home of the governor of Imo State, Sen Hope Uzodimma,” he said via a statement.

“At about 9 am today, Saturday, April 24th, a group of hoodlums numbering about 15 driving in a motorcade of three vehicles accompanied by a tipper loaded with used tyres, stormed the country home of the governor in Omuma,  Oru East  LGA and attempted to burn down the house.

“However, vigilant security operatives attached to the Governor’s house successfully repelled the attack and consequently minimised the damage they had planned to unleash.

“In the crossfire that ensued a few casualties were recorded.  Preliminary investigation suggests that the foiled attack may have been politically sponsored.”

The commissioner noted that security agencies have been asked to investigate the incident, promptly apprehend the sponsors and their agents and bring them to justice.