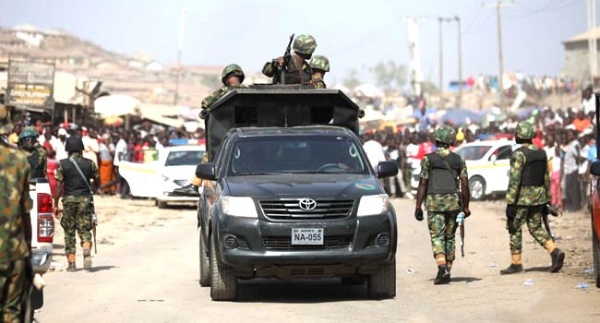 An officer and six soldiers died on Sunday in a counterinsurgency operation in Mainok, Borno State, Nigerian Army authorities have said.

Five other soldiers who sustained various degrees of injuries have been evacuated to the military medical facility for treatment.

Although they did not specifically explain how the security operatives died, reports had emerged that some soldiers were killed in an airstrike by the Nigerian Air Force (NAF).

Sources claimed that the air force bomber accidentally hit the wrong coordinates while targeting Boko Haram insurgents who had attacked the troops.

Amid the controversy sparked by the incident, NAF said it was investigating the airstrike and would give an update as soon as it could.

In a statement on Monday, the Director of Army Public Relations, Brigadier General Mohammed Yerima, explained that the security personnel were attacked by insurgents mounted on an unconfirmed number of gun trucks, and foot soldiers with the possible intent of establishing a phantom caliphate in Mainok town.

During a duel between the troops and the insurgents, the soldiers were said to have lured a number of the terrorists into a killing zone within their camp.

Thereafter, the Air Task Force of Operation Lafiya Dole scrambled Alpha jets and helicopter gunboats which took turns to decimate the trapped terrorists, leading to the killing of scores of Boko Haram terrorists.

Read the statement by the army below:

MAINOK:  COAS APPLAUDS TROOPS OF OPERATION LAFIYA DOLE FOR THEIR RESILIENCE AND DOGGEDNESS

On Sunday 25 April 2021, troops of Operation Lafiya Dole deployed in Mainok, Borno State, came under multi-directional attacks by Boko Haram/ISWAP terrorists mounted on an unconfirmed number of Gun Trucks as well as foot soldiers with the possible intent of establishing a phantom caliphate in the town.

The terrorists were held by the gallant troops of 156 Task Force Battalion until the arrival of reinforcement teams from 7 Division, Special Army Super Camp Ngamdu and Army Super Camp 4, Benesheik.

During the firefight which lasted several hours, the gallant troops tactically lured a number of the terrorists into a killing zone within their camp where the Air Task Force of Operation Lafiya Dole scrambled Alpha jets and helicopter gunboats which took turns in decimating the already trapped terrorists.

In the aftermath of the encounter, scores of Boko Haram terrorists were neutralised with their body parts littering the area and a number of their gun trucks destroyed.

Regrettably, one gallant Officer and six soldiers paid the supreme sacrifice while 5 other soldiers sustained various degrees of injuries.

The wounded soldiers have already been evacuated to the military medical facility for treatment. Currently, troops are in full control of Mainok and environ as exploitation for fleeing terrorists is ongoing.

The Chief of Army Staff, Lt Gen Ibrahim Attahiru has applauded troops of Operation Lafiya Dole for their resilience, commitment, and doggedness and further reassured Nigerians of the Army’s unalloyed commitment to defeating Boko Haram/SWAP terrorists while urging citizens to always avail the troops with accurate and timely information for prompt action.