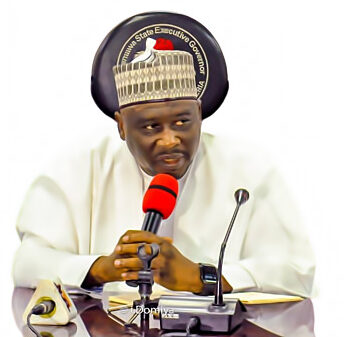 According to our sources, the Department of state service (DSS) on Friday invited AA Lawal Uba over his vituperation on the speaker, Adamawa state house of assembly, Aminu Abbas.

In reaction to the invitation by the DSS, the main oppostion party in Adamawa, the All progressive congress (APC) blamed Fintiri for Uba’s travails and accused him of stifling dissenting voices in Adamawa state.

But in a statement issued by the Director General, media and communication, Solomon Kuamangar, today, the Governor’s aide said Fintiri should not be blamed for the travails of the misguided fellow, AA Lawal Uba.

The statement said AA Lawal Uba is a misguided critic who ought to know that the Governor on several fora has reiterated and welcome constructive criticism by anyone he should, however, know the difference between criticism and hauling insults on leaders. He, therefore, has himself to blame and not Fintiri.

Kumangar lambasted the APC as a party seeking relevance in Adamawa to divert attention from the recent dollarized primary that produced a candidate who has set members at daggers drawn at each other.

It is wrong to condemn impunity when there is none and turn blind eyes to the recent impunity it perpetrated in the recent dollarized  APC governorship primary in Adamawa.”

He said, “It is therefore wrong for APC to assume that Fintiri ordered the invitation of AA Lawal Uba by security agencies simply because the victim of injustice is not a man of stout means.”

The statement urged AA Lawal Uba, APC, “to leave Fintiri out of their political travails and allow God’s time and preferences to prevail.”