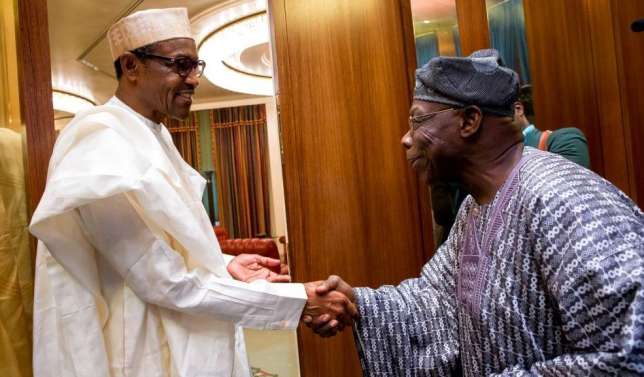 7 things Obasanjo said about PDP and APC after he announced that his movement will be joining the ADC.

Former President Olusegun Obasanjo announced on Thursday, May 10, 2018 that his Coalition of Nigeria Movement (CNM) has adopted the African Democratic Congress (ADC) as its political party. It was also another opportunity for ‘Baba Iyabo’ to rip into the PDP and APC.

Here are seven things we picked out of Obasanjo’s press conference.

1. Obasanjo says no one should listen to the apology of the PDP

The PDP recently apologised to Nigerians for its many years of poor leadership. But Obasanjo says no one should forgive PDP just because the party has apologised.

“PDP offered apology without disciplining those who set Nigeria on a course of ruin and some of them are still holding leadership roles in their party. Nigerians may forgive, but Nigerians should never forget; otherwise they will be suffering from amnesia and the same ugliness may raise its head again”, Obasanjo said.

Obasanjo was twice elected president on the PDP platform and governed Nigeria from 1999 to 2007.

Obasanjo was a card carrying member of the PDP until February of 2015 when he instructed his ward chairman to rip apart his PDP membership card in public.

2. Obasanjo says APC has been a disaster

According to Obasanjo: “APC, as a political party, is still gloating and revelling in its unrepentant misgovernance of Nigeria and taking Nigerians for fools. There is neither remorse nor appreciation of what they are doing wrong. It is all arrant arrogance and insult upon injury for Nigerians.

“Whatever the leadership may personally claim, most Nigerians know that they, Nigerians, are poorer today than when APC came in and Nigeria is more impoverished with our foreign loan jumping from $3.6 billion to over $18 billion to be paid by the present and future generations of Nigerians.

Obasanjo has collapsed his movement into the ADC (Daily Post)

“The country is more divided than ever before because the leadership is playing the ethnic and religious game which is very unfortunate”.

3. The ADC will give young people a chance, according to Obasanjo

Obasanjo says, the ADC “will sanitise the system. With the ADC, embracing the policy of 30% youth of under 40 and 30% women in all organs of the party, a significant paradigm shift has been brought about in the power equation. The ADC is a reformed and reinvigorated party”.

4. Obasanjo wants Nigerians living abroad to be able to vote

“The National Assembly must amend the Constitution to allow Nigerians in diaspora with current Nigerian passports to vote in all Nigerian elections at Nigerian Embassies abroad”, Obasanjo said.

In Baba Iyabo’s words: “To curb corruption, primary elections should cease to be by delegates but by all card-carrying and financial members of the party within their constituencies. This will save lives as many people have died by being shepherded to a central location as delegates to vote at primaries.

Obasanjo said: “worse still is what PDP has now accepted as part of its failure and disappointment of the nation which is looting government treasury to finance individual and party elections. Unfortunately, APC has followed suit”.

7. Obasanjo says the PDP stole from the treasury to finance 2015 election

According to Obasanjo: “I was shocked when an insider in the PDP told me that the amount of money the party used for 2015 elections would be in the neighbourhood of $3 billion. It was all directly or indirectly from the government treasury”.