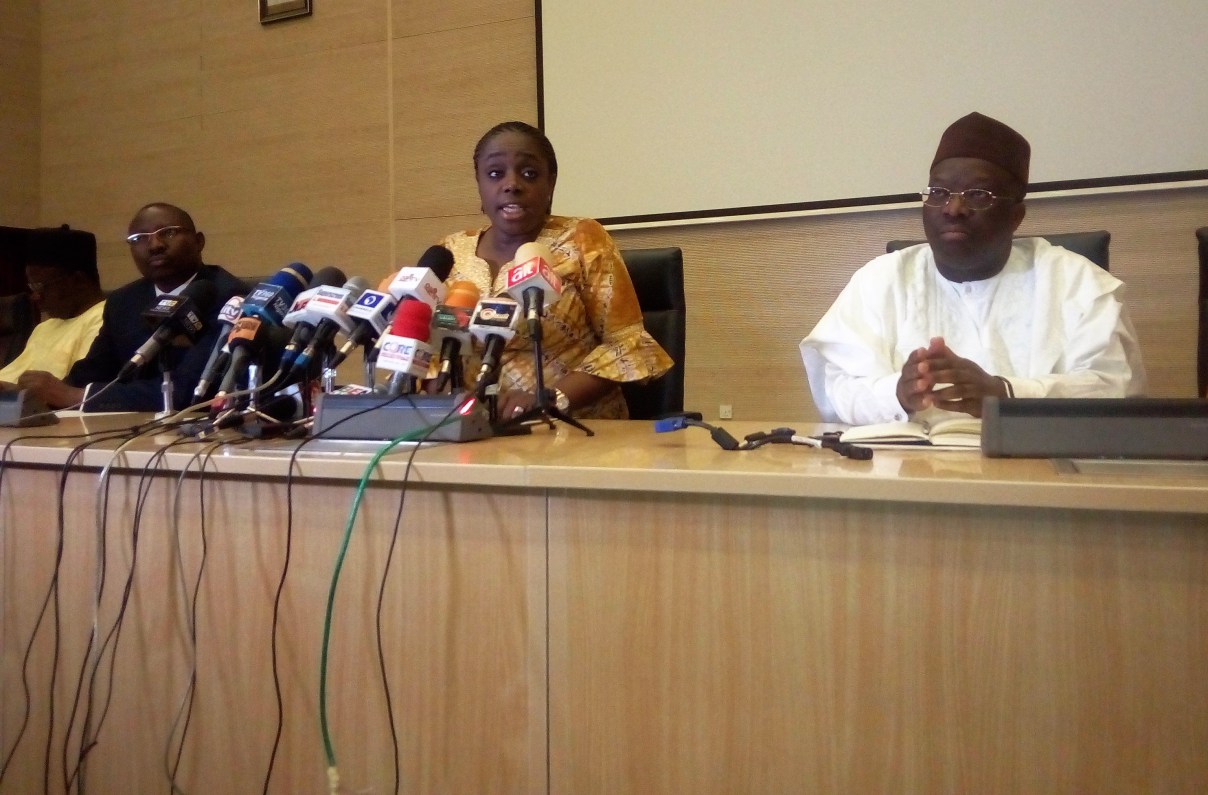 Fourteen persons who gave useful tips that led to the recovery of several billions of Naira and some millions in hard currency from some corporate tax evaders were paid about N439.3 million this week, Finance minister, Kemi Adeosun, said.

The Minister did not name the offending companies. But, she told reporters in Abuja that about N14.8 billion, consisting N7.8 billion, $378 million and £27,800 were recovered.

She said the recovered monies paid to the Federal Inland Revenue Service (FIRS) have since been shared.

Following tips by the whistleblowers in line with the whistleblower policy of the federal government, Mrs Adeosun said the companies were busted after years of either evading taxes or under-paying government as a deliberated policy.

“This is the first time we are having that number (of whistleblowers) where we have concluded either communications with the companies and they have actually paid the money to FIRS,” the minister said.

Since the whistleblower policy was introduced in December 2016, the minister said about 8,373 communications have so far been received from various persons willing to volunteer information on tax evaders.

Out of the number, she said about 1,231 were tips that triggered about 534 investigations so far from where ten accused persons were currently under prosecution, with four already convicted of the offence.

Apart from the changing narrative on tax by government in recent times, the minister said the extension of the deadline for the Voluntary Assets and Income Declaration Scheme (VAIDS) to June 30, 2018 has seen far more tips received from whistleblowers on tax evasion.

Besides, since the introduction of VAIDS in June 2017 to grant amnesty to tax defaulters, she said more tax payers have come under the tax net to boost revenue.

Also, over 130,000 high net worth individuals and companies that have potential tax underpayments issues against them have so far been identified.

She announced that the federal government was actively preparing cases for prosecution against tax evaders, assuring that very serious actions would commence by the end of June after the tax amnesty deadline.

Based on the experiences gathered by the whistleblowers’ policy unit of the Federal Ministry of Finance, following its study tour of the United Kingdom, the minister said the government was revising the strategy to accommodate more sophisticated mode of operations.

In addition, the minister said data were being compiled by Project Lighthouse in the Federal Ministry of Finance to combine data from federal, state agencies and foreign countries on tax matters.

So far, Mrs Adeosun said data have been received from a number of sources, including Lagos, Kaduna, Kano and Ogun States’ land registries as well as the Federal Capital Territory.

Nigeria, she said, has been able to equally request for data from a number of countries, including traditional tax havens and other foreign jurisdictions under the exchange of information protocols.

“Under the exchange of information protocols, this information relates to bank records and financial filings for tax purposes obtained from tax havens who are signatories to the information sharing agreements such as British Virgin Islands and Mauritius,” she said.

In line with the protocols governing the exchange of information, the minister said received data from overseas countries would only be used for taxation purposes.

Common violations by non-compliant tax payers include deliberate under-declaration or non-declaration of income earned, including income from government contracts and overseas trading, and collection of Value Added Tax (VAT) and refusing to duly remit to FIRS.

Others included charging of non-allowable personal expenses to company accounts, particularly with reference to overseas school fees; inconsistency between income declared for tax purposes and the value of assets owned.

On 2017 budget performance, Mrs Adeosun said she was optimistic that by the end of this month, about N1. 5 trillion would have been spent on capital projects.

The minister admitted there were still some irregularities in government payroll system, assuring that government would pay close attention to details to correct all anomalies in the Integrated Payroll and Personnel Information System (IPPIS).

Although she could not clarify the controversy surrounding alleged over 80,000 ghost workers discovered on the payroll of the Nigeria police, the minister directed reporters’ question on the issue to the Office of the Accountant General of the Federation.

“We are investigating some cases where names on the payroll is different from those on the bank account. In some cases, it is as simple as some people got married and did not update their names. In other cases, it is a matter of fraud,” she explained