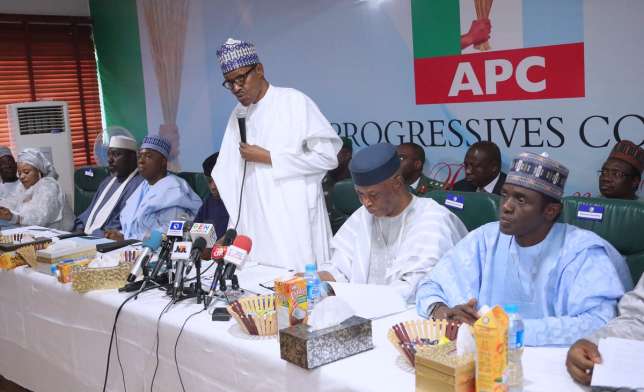 member of the All Progressives Congress in Lagos has been shot dead at the party’s local government congress in Agege.

The member, identified as Nurudeen Olanose, was allegedly shot at Central School, Dopemu, during a fracas that ensued after voting had ended on Saturday.

Two others are in critical condition while nine people have been arrested and taken to Area G Police Division in Agege.

When contacted, Chike Oti, the Spokesperson of the Lagos State Police Command, said “I’ll get back to you.”

There are different accounts of what led to the shooting at the congress venue in Agege.

A witness told Newsmen that violence broke out after Mudashiru Obasa, the Speaker of the Lagos State House of Assembly, visited the venue.

“Obasa came to the venue at Dopemu, from nowhere a gunshot killed one of the party members. As he was going, his security men just dragged the guy that was shot, they dropped him on the other side of the road in order for him to pass and run away,” said the witness, who declined to be named for “political reasons”.

Musibau Razak, the spokesperson for the Lagos Speaker, said his principal did not attend the congress at Dopemu.

“It is a lie,” Mr Razak told Journalists.

“From my investigation, it is the APC local government congress in Agege and those who were supposed to be at the congress venue were there, they did their congress and left. But you know in politics, there will always be disgruntled elements, I think that was what happened.

“What happened at Dopemo had nothing to do with my boss.

“Of course, as a member of APC and a Speaker, if anything happens he will be contacted and he will make necessary arrangement for peace to reign. Policemen were there, SSS were there, the INEC was there, so nobody should link that thing to the Speaker. The Speaker’s effort is to maintain peace.”

Rotimi Sulyman, Media Adviser to Ganiyu Egunjobi, the Chairman of Agege local government, said one person died from the violence.

He also said that Mr Obasa was “nowhere near” the congress venue.

“After the election has been concluded, some people who felt they are fast losing the grip of the party, they started fomenting trouble and in the course of it one of the persons loyal to our camp died,” Mr Sulyman told PREMIUM TIMES.

Mr Sulyman said those arrested by the police included one Bosun Adigun, a driver to Jubril Kareem, the former chairman of Agege local government.