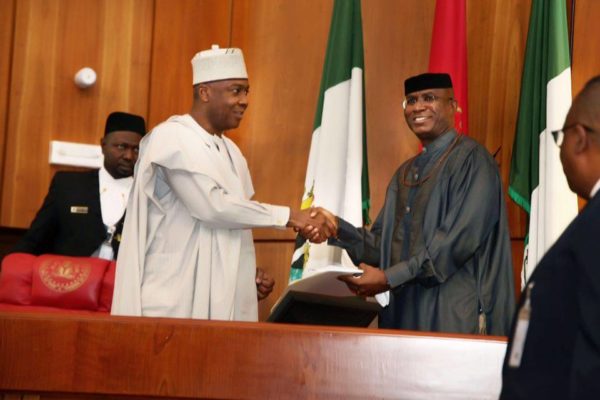 The Nigerian Senate said Monday night that it will not stop Senator Ovie Omo-Agege from attending plenary on Tuesday, in compliance with a Federal High Court order.

The Senate had initially stated it would not respect the order, since it has filed an appeal, in a higher court.

But in a sudden twist, the Senate gave its new position in a statement by its spokesman, Senator Sabi Aliyu Abdullahi, chairman of the Committee on Media and Publicity.

“The Senate leadership has been briefed by our lawyers on last Thursday judgement of the Federal High Court, Abuja, on whether the Senate has the legal authority to suspend a member for certain misconduct or not.

“We have equally filed an appeal against the judgement of the court and a motion for stay of execution of the judgement at the Court of Appeal.

“As an institution that obeys the law and court orders, the Senate has decided that it will comply with the judgement of the Federal High Court and do nothing to stop Senator Ovie Omo-Agege from resuming in his office and at plenary from tomorrow May 15, 2018, pending the determination of the application for stay of execution.

“The Senate has been advised that since the motion for stay of execution of the Thursday (May 10, 2018) judgement shall be heard and possibly determine on Wednesday, May 16, 2018, we shall therefore respect the subsisting High Court judgement and await the appellate court decision on the pending motion”, said Sabi Abdullahi.

The senate backpedalling came hours after Senator Omo-Agege vowed to attend today’s session despite the reported beefing up of security by the National Assembly authorities.

Last week Thursday, a Federal High Court in Abuja nullified the suspension of Omo-Agege for 90 days by his colleagues and declared it illegal.

The senator representing All Progressives Congress (APC) in Delta Central, was suspended by the senate because he openly criticised the amendment of election sequence carried out by the senate.

He accused the senators of making provision for election sequence in the amended Electoral Act to disfavour President Muhammadu Buhari,

The 2019 general election sequence released by the Independent National Electoral Commission (INEC) placed the presidential election first, but the senators reversed it

Buhari refused to assent to the bill and the court had also ruled that the senate had no power to alter the sequence of election as fixed by INEC.

Dimgba said that the reason given by the Senate and the Senate President for suspending Omo-Agege was unconstitutional.

“While the legislature has powers to take disciplinary measures against its members, the reason given for the punishment is an unconstitutional reason.

“I hereby nullify the suspension of the plaintiff (Omo-Agege) which was based on the recommendations of the Senate Committee on Ethics, Privileges and Public Petitions with immediate effect.”

Dimgba also ordered the Senate to pay Omo-Agege any outstanding salaries or allowances which were due to him during the period of the suspension.

The judge stated that the decision recommended by the committee to punish Omo-Agege for going to court was wrong and contravened Sections 4 and 6 of the constitution adding that he had a right to go to court.

“Access to court is one key indicator of a democracy, the exercise of his rights cannot be a basis for punishment.”

The judge further stated that the court took judicial notice of the fact that while the suit was pending in court, the senate went ahead to suspend the senator for 90 legislative days.

“In sanctioning a legislator, the legislature must act within the law. While this suit was pending, and to the knowledge of the Senate and the Senate President, they went ahead and imposed a sanction on him.”

The judge also said that the 90 legislative day suspension was against Order 67, Rule 4 of the Senate Standing Rules which provided for a lawmaker to be suspended for only 14 legislative days.

He maintained that suspending the senator for more than 14 days was denying his constituents the required representation.

He, however, held that the legislature had the powers to sanction any lawmaker who set out to make comments or act in a way that could bring disrepute to the institution.

But that the legislature went out of track and arrived at a wrong and false end by punishing the senator for exercising his rights.

According to him, Omo-Agege’s right was not breached when the senate referred him to its committee on Ethics, Privileges and Public Petitions as he erroneously believed.

Omo-Agege filed the suit to challenge his suspension from the senate.

He asked the court to among other reliefs, grant an order restraining the defendants, their servants, agents, privies or officers from interfering with his rights and privileges as a senator and to make any order that it may be deem fit