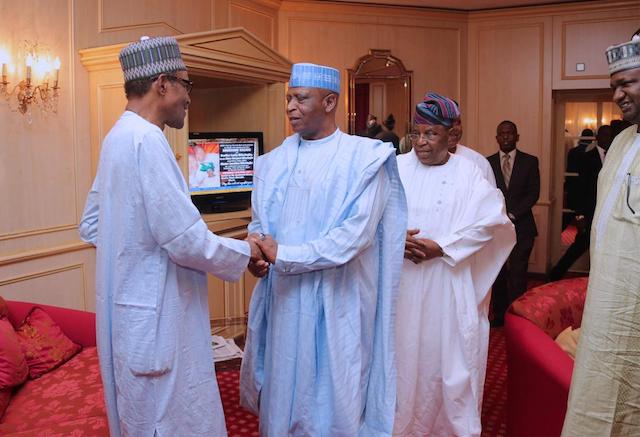 Another group of ex-Peoples Democratic Party (nPDP) leaders, who joined the coalition that formed the All Progressives Congress (APC) in 2014, has slammed the Kawu Baraje group which claimed that the members were marginalised.

Last week, Baraje, a former acting chairman of PDP, and a former secretary, Olagunsoye Oyinlola, submitted a letter to the APC leadership, demanding a response and a meeting within seven days.

Oyinlola had since joined the African Democratic Congress, along with Olusegun Obasanjo’s Coalition Movement.

The ultimatum he and Baraje gave expires today.

But in a blow to the claims by Baraje, another group of ex-PDP members in the APC not only debunked the claims of marginalization, but also challenged the Baraje group to state where a meeting was held that mandated them to write the letter to the party leadership.

Senator Abdullahi Adamu, Chief Theodore Georgewill and House of Representatives member Abdulmumin Jibrin, in their letter, said Baraje had no mandate or the moral right to write and be making requests on behalf of the group.

According to them, members of the so-called nPDP had been taken care of in appointments. They described the Baraje group’s letter as self-serving and a personal agenda, adding that the unseen hands behind the letter could be seen from the signatories.

They also faulted Oyinlola’s role since he had left the party to become the coordinator of former President Olusegun Obasanjo’s Coalition of Nigeria Movement (CNM) when he signed the letter.

The Adamu group insisted that should the party leadership or President Muhammadu Buhari call the Baraje group to a meeting, their group should also be invited as critical stakeholders.

The Adamu group listed the positions being occupied by the former nPDP members, including Senate President, House Speaker, governors, senators, ministers and heads of government agencies. They wondered what else they expected from the Buhari administration.

“We received with great shock and embarrassment the news that a former acting chairman of the PDP, Alhaji Kawu Baraje led four others to deliver a letter they claimed was on behalf of the nPDP which is defunct and has long dissolved into the APC during the 2013 merger.

“In the letter, Baraje stated that we members of the then nPDP group are being marginalised, maltreated and witch hunted in the APC and requested for an urgent meeting with the party and Mr President within one week.

“As members of the then nPDP, we are aware that the last meeting that was held by the group was in 2014. Since then, no meeting has been called. Where did Alhaji Baraje and Olagunsoye Oyinlola obtain the alleged resolution to write the said letter? When and where was the meeting held? Who are those that attended the meeting?

“We ordinarily would have ignored such a joke, but it is a dangerous joke taken too far. How can you explain that one of the two signatories to the letter, Olagunsoye Oyinlola has since left the APC for the African Democratic Congress (ADP) after going on AWOL to the Obasanjo Coalition for Nigeria. Yet same person is asking to meet the APC leadership to address grievances? This clearly shows the sinister motive behind the letter which is not far from destabilising the party at this most critical time.

“In any case, the letter is full of contradictions, false assertions, misrepresentations, distortion of history and facts and in many instances outright lies.

“We as initiators and founding members of the defunct nPDP therefore wish to condemn and disassociate ourselves from the letter and apologise for the obvious embarrassment the letter have caused to our party and government.

“We wish to reaffirm our support and confidence in the party and Mr President and we do not in any way feel marginalised or maltreated as we are clearly in the league of the biggest beneficiaries of the party.”

They added that “While the Muhammadu Buhari- led CPC got the president, the Asiwaju Bola Tinubu- led ACN got the Vice President. We the nPDP as we then were eventually got the combination of Senate President and Speaker of the House of Representatives though under somewhat questionable circumstances.

“All of these offices control enormous amount of patronage and instruments of reward. It is strange that we did not see any qualms when the Senate President and Speaker dispensed about 200 appointments, including committee chairmen, without asking for nomination from Mr President, Vice President, the APC as a party, Asiwaju Bola Tinubu as party leader, Baba Akande, pioneer national chairman and a host of others. Is that not marginalisation?

“If we the nPDP did not view that as marginalisation, then we do not have the moral justification to accuse the President if he appoints his ministers without seeking for our nominees. All the key stake holders of the nPDP were accommodated as follows

The group said: “The only key members that were left with nothing are Governor Rotimi Amechi and Hon Dakuku Peterside who lost the Rivers State gubernatorial election and were promptly accommodated by Mr President. While Rotimi Amechi was appointed Minister of transport, Peterside became the DG NIMASA.

“The case is the same at the party level. All the party officials promoted by key nPDP stake holders are still holding their positions in the party. How can we then complain of marginalisation by the party?