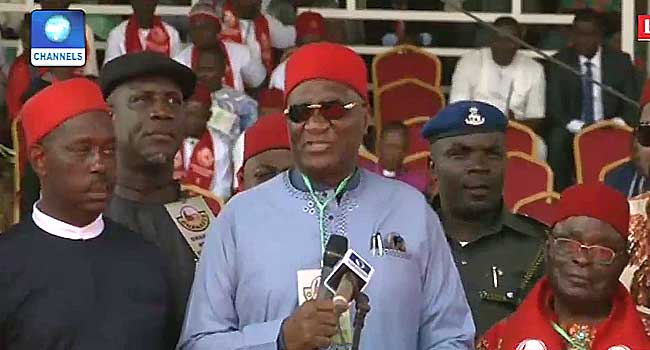 The Igbo Socio-Cultural Group, Ohanaeze Ndigbo have called for a review of Nigeria’s democratic structure, demanding regional government and a review of the nation’s constitution.

The group also called for the enthronement of the principles of equity and fairness noting that this will help Nigeria achieve all-round development and solve its political and economic challenges.

These among others were the demands of the Ohanaeze at the Summit held on Monday in Awka, the Anambra State Capital.

Many other suggestions formed the content of the communique of the summit which was read by former CBN Governor, Charles Soludo.

Other demands of the group include a proposed single six-year term for the president, rotational presidency, five vice presidential seats for equal representation, resource control by states, removal of the state of origin clause and the creation of a merit and equal opportunities commission to replace the federal character commission.

The event also had in attendance representatives of the Yoruba socio-cultural group Afenifere, the Niger Delta and the north-central.

The President of the Ohaneze, John Nwodo also at the event called for equality in the affairs of Nigeria. He added that he is not the sole convener of the summit.

“You can say that we propelled this but it is not just us that did it, it is the people that did it,” he said.

He added that the system has put out a structure that is nepotist and marginalised the Ndigbo people.

“The system is devoid of a balance. The indices are so clear for all to see. We have the lowest number of states among the geo-political region. Even amongst us, we have only 95 local governments which is not up to the sum of two local governments in one of the zones,” he said.