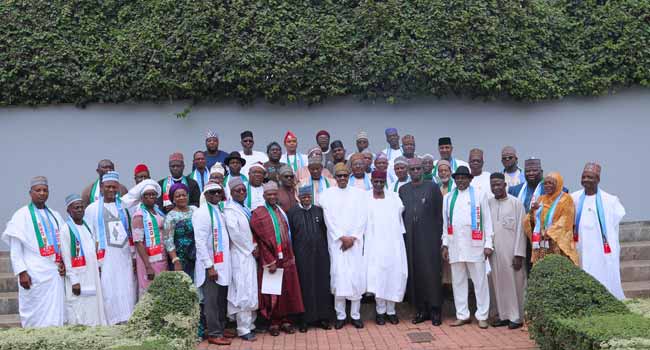 Former President Olusegun Obasanjo has reacted to the claim by President Muhammadu Buhari that a past administration spent more than $15bn on power projects, with no power to show.

President Buhari made the claim on Tuesday while addressing members of the Buhari Support Organisation, who were led by the Comptroller-General of Nigerian Customs Service, Hameed Ali, to visit him at the State House.

“One of the former Heads of State between that time was bragging that he spent more than 15 billion American dollars, on power,” the President said.

Although President Muhammadu Buhari did not directly mention the name of the former President he was talking about, the Obasanjo administration has been repeatedly accused of spending up to $16bn on power with little to show for it.

The former President also believes the criticism was targeted at his administration and reacted to it in a statement a few hours after President Buhari’s comments were published.

In the statement signed by Mr Akin Osuntokun, Director of Strategic Communications of the Coalition for Nigeria Movement, which he founded, Obasanjo accused President Buhari of playing politics with statistics.

According to the former President, the claim that his administration spent $16bn on power was the result of propaganda aimed at demarketing him.

The statement read in part, “A presidential panel headed by the then VP Goodluck Jonathan set up by the Umaru Yar’Adua government put a lie to this after the same administration had sacked one Engr F. Somolu the then Secretary of NIPP who first drew attention to the lie: that $16 had been spent on power project.

“The Panel made up of so many actors including CBN officials then found out that only $3.7 billion was disbursed out of the $10 billion budgeted and the balance was kept in an escrow account at the CBN.

“The CBN confirmed this to the panel and it was published…It was then found out that Tanimu Yakubu then Economic Adviser to President Yar’Adua began the propaganda against former President Obasanjo and Engr. Somolu then with Yar’Adua wrote a secret memo inside the statehouse to correct the wrong notion about $10 billion.”

He said, “Is it not beneath the dignity of the exalted office he holds to join the chorus of beer parlour gossips?

“How can a president who has all the information at his beck and call degenerate to this level?”

Obasanjo and Buhari have had a long history dating back to their days in the Army with Buhari serving as Minister of Petroleum when Obasanjo was head of state.

But the relationship between both men gradually turned sour and took a turn for the worse in January this year when Obasanjo released a long statement criticising the President and warning him against seeking re-election.