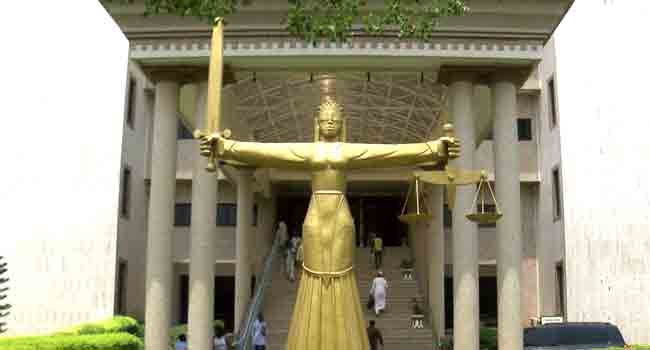 Badeh who appeared before Justice Okon Abang is standing trial along with Iyalikam Nigeria Limited on 10 counts bordering on abuse of office.

Other charges include: criminal breach of trust and money laundering to the tune of N3.97billion brought against him by the Economic and Financial Crimes Commission (EFCC).

Testifying as the twentieth prosecution witness, Peter Oleji, a Compliance Officer with Guaranty Trust Bank Plc, while being led in evidence by the prosecution counsel, Rotimi Jacobs (SAN), told the court all he knew about the case in relation with GTB and EFCC.

He said, “We got a letter from the EFCC, requesting that we provide them with the Mandate Card and Statements of Accounts (two accounts) of Alex Badeh. We responded and forwarded them with documents required and also with a Certificate of Identification of the Statements of Accounts, confirming that they were printed from a system that was in a perfect working condition”, Oleji said.

The letter of response from GTB dated March 26, 2018, addressed to EFCC, was shown to the witness and he identified it. It was tendered and admitted in evidence as exhibit T221-T2241.

Another letter of response from GTB dated March 6, 2018, addressed EFCC, was equally admitted in evidence as exhibit T231-T2361.

While informing the court that the name on page three of exhibit T223-T2241 was “Group Captain Alex S. Badeh”, the witness said the account, opened on December 20, 2004, was a domiciliary account, explaining that “it is for Badeh’s foreign currency, that is, for Pounds Sterling and Euros”.

Oleji further told the court that page four of the same document was Badeh’s Corporate account and “the signatories to the account are Alex S. Badeh and Mary Iyah Badeh”.

The case was thereafter adjourned until July 2, 2018.