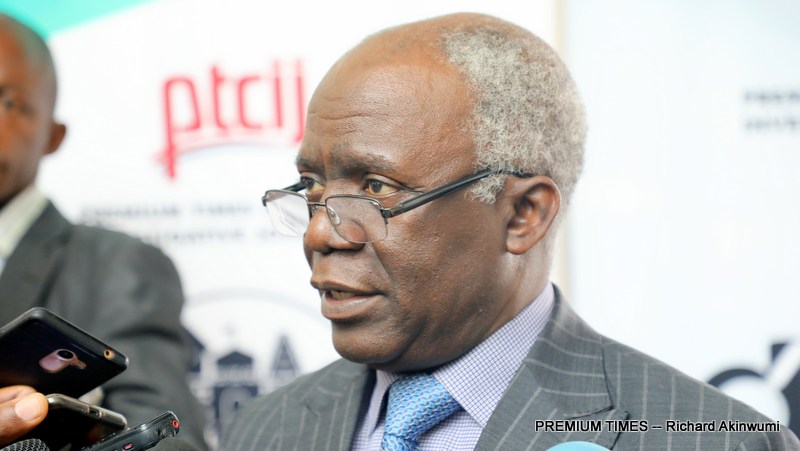 A human rights activist, Femi Falana, has accused the President Muhammadu Buhari-led government of committing the same “incessant infringements” his All Progressives Congress party had accused their predecessor of perpetrating.

In a statement made available to Journalists Sunday, Mr Falana said before it came into power, the APC leaders had continually cried out against the violation of the fundamental rights of their members and other Nigerians.

“The human rights community did not hesitate to take up the complaints of the victims of such abuse of human rights,” Mr Falana, a Senior Advocate of Nigeria, said.

“For instance, at the instance of the defunct All Nigerian People Party and other opposition political parties, our law firm challenged the constitutional validity of police permit when the Nigeria Police Force violently disrupted the rally held by the ANPP in Kano in May 2003 to protest against the rigging of the 2003 general election by the Olusegun Obasanjo regime.

“General Muhammadu Buhari and other ANPP chieftains were teargassed and dispersed on the grounds that they had assembled without obtaining a police permit.”

The ANPP is one of the political parties that metamorphosed into the APC in 2014.

“The Federal High Court granted the reliefs sought by the Plaintiffs. In upholding the fundamental rights of Nigerians to freedom of expression and assembly the Court declared that police permits for rallies and public meetings were illegal and unconstitutional,” Mr Falana continued.

“The appeal filed against the judgment by the Inspector-General of Police was dismissed by the Court of Appeal which held that police permit was a relic of colonialism which cannot be justified under a democratic dispensation. On the basis of the verdicts of both the Federal High Court and the Court of Appeal, the National Assembly amended the Electoral Act in 2015 to provide for police protection for Nigerians during demonstrations.”

Mr Falana said the human rights community also won a legal battle against the “reckless arrest” and detention of citizens without trial.

“In addition to the fundamental right of every person to personal liberty guaranteed by Section 35 of the Constitution of the Federal Republic of Nigeria 1999 as amended, the Administration of Criminal Justice Act, 2015 has made provisions for civilized treatment of criminal suspects in Nigeria.

“Thus, under the current human rights law regime, no citizen shall be detained in any custody beyond 48 hours without a remand order issued by a court of competent jurisdiction.”

Mr Falana’s comments came just as the Committee for the Protection of Journalists raised an alarm over the arrest and detention of a journalist, Jones Abiri, by the State Security Services since 2016.

On Thursday night, Garba Shehu, the president’s senior special assistant on media and publicity, defended the SSS’ action saying Mr Abiri is not a registered journalist with any of the media professional bodies in the country.

Mr Shehu said there is no evidence of Mr Abiri belonging to any chapel or membership of the Nigerian Union of Journalists (NUJ or payment of the union’s check-off dues.

“Assuming without conceding that Mr. Abiri is a not a journalist, why should he be subjected to indefinite detention and not arraigned in a court of law for alleged economic sabotage?” Mr Falana said.

“Mr. Shehu did not refer to any law that compels every journalist in Nigeria to be a member of the Nigerian Union of Journalists.”

The lawyer also frowned at the government’s permission of the security agencies to disperse peaceful rallies convened by aggrieved citizens adding that under the pretext of maintaining law and order scores of unarmed protesters had been brutally killed by the police and the army.

“The arrest and detention of criminal suspects and law abiding people without court orders has continued unabated,” he said.

“To compound the brazen violations of the human right of Nigerians to personal liberty the orders for the release of certain persons made by competent courts have been treated with contempt in defiance of the Rule of Law. Curiously, officials of the federal government have continued to expose the country to unwarranted ridicule by defending the illegal detention of citizens without trial.”

On the arrest of Enyinnaya Abaribe, an Abia State senator, over his alleged links to the Indigenous People of Biafra, Mr Falana said it was common knowledge that the senator had stood surety for Nnamdi Kanu, the leader of IPOB.