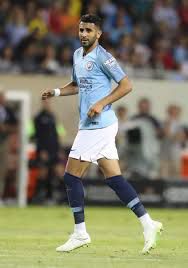 Manchester City forward Riyad Mahrez has been cleared to return to training this week following an ankle knock sustained in Saturday’s 3-2 win over Bayern Munich in the United States.

Mahrez, who joined the Premier League champions on a five-year contract earlier this month, was substituted after a tough tackle by Bayern defender Chris Richards in the first half of their final pre-season clash.

However, City allayed fears that the Algerian international, who returned to Manchester with his foot in a protective boot, would miss the start of the new season. City take on FA Cup winners Chelsea for the Community Shield on Sunday.

“A scan today has revealed no significant damage, and he (Mahrez) could be available for selection for this weekend’s Community Shield against Chelsea,” City said on their website.

Pep Guardiola’s team then take on Arsenal in their opening league clash on 12 August.