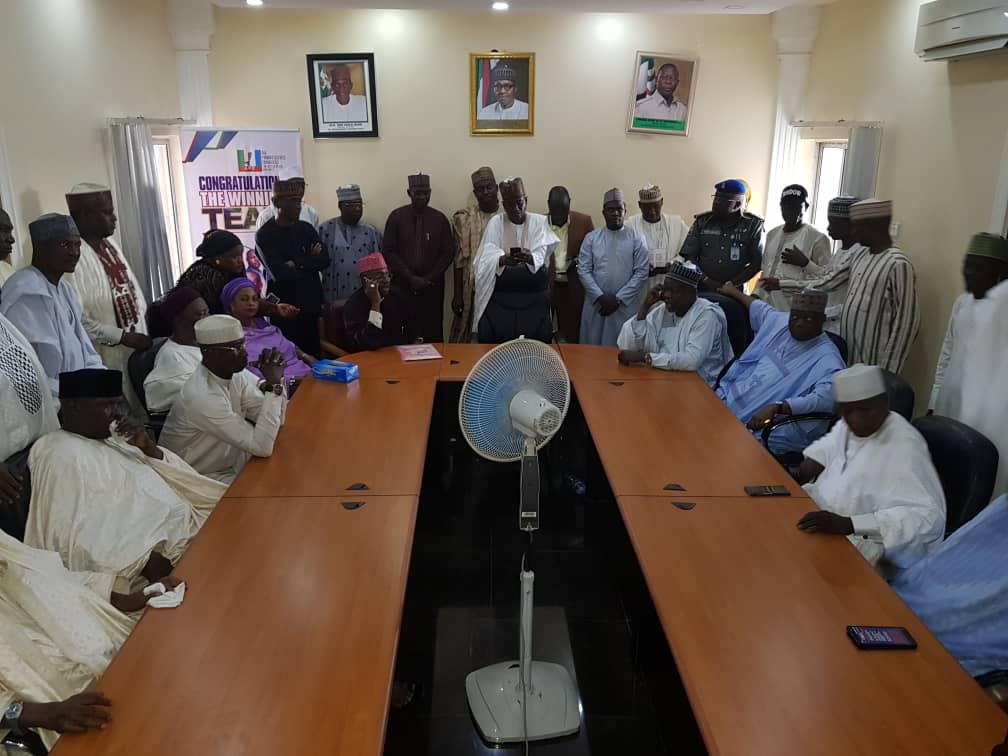 Mijinyawa Kabiru, who is also seeking reelection on the platform of the APC in 2019, spoke to journalists during the submission of form by the Gov. Umar Jibrilla of Adamawa State.

This came as the Adamawa Elders Forum, a body of eminent elders from the state led by a former Minister for Education, Birma Duda, declared support for the second term bid of the governor.
The group in a statement by Dauda Birma, said the group position was made public during the submission of interest form by Gov. Umar Jibrilla to the APC national secretariat in Abuja on Wednesday in Abuja.

They noted that the governor had endeared himself to the people of the state through his populist-oriented programmes and policies which they noted had impacted positively on the socio-political and economic life of the state.

Duda said as the founding fathers of the state, the AEF owed it a duty to support credible candidates seeking for elective positions irrespective of their political leanings.
He therefore asked the people of the state to actively take part in the ongoing Continuous Voter Registeration of the INEC by getting their PVC so as to bring back Bindow in 2019.

The Elders said Governor Bindow had continued to make due process the hallmark of his administration.   According to Ali Gulak, Bindow’s attitude towards public finance made it possible for the governor to record giant strides within three years in office.

Â He urged all aspirants contesting gubernatorial ticket with Bindow to drop their ambition and wait till 2023, those of voting age to ensure that they obtained their permanent voter card, which he said was the only tool to vote back a good leader like the governor. He said, the governor has done well beyond the expectations of many people considering the meagre resources that have come into the state within this period. The way he manages the resources is something other governors should emulate. For instance, this is the first time projects are going on simultaneously in all the communities in Adamawa State; I’ m not talking about wards but communities.

The Elders took turn to advice  prospective aspirants contesting with Bindow to drop their ambition or face rejection at the polling Unit.

Meanwhile Youths from Adamawa State storm the APC National secretariat, Abuja to show solidarity with their Governor, the Youths numbering over a thousand was seen brandishing banners with different inscriptions like “Bindow We Know” “MODI FORGET 2019” NUHU RIBADU DON’T contest against the man that conquered you in 2015”.  “SAI Bindow” rented the air immediately the Youths and Women sighted the Governor’s convoy.