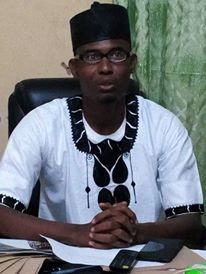 The Chairman Center for leadership Evaluation, Mr. Samson on Sunday, lambasted Mr. Mustapha Atiku Ribadu for hiring “protest contractors” in Yola, to protest against the allegation of certificate forgery he and his group has label against Gov. Umar Jibrilla of Adamawa State.

Mr. Samson frown at the behavior of Mustahpa Ribadu who he described as an “ignorant fellow” who is as jobless as the touts he sponsored to protest against the Government of Gov. Umar Jibrilla Bindow. Samson condemned the protest and advised Mustapha Atiku Ribadu to focus on getting a Job that will keep him busy instead of hiding under politics, going around to tell people he is a politician.

“The action of Mustapha Ribadu Atiku and his touts could best be described as shameful and embarrassing, attributing the protest to ignorance of the highest order. His words: “Let me recognize that we have problems and challenges in Nigeria. But I would limit myself to the issue of unemployment and poverty. Rising from this, some people have found a way of surviving. One way of surviving in Adamawa is to organise protest. There are people who are considered as protest contractors.
“What is happening is that some people go to those that lost woefully to Bindow is the recent APC guber primaries and collected a N1500 each for number of protesters and when they organize these young people, they pay them only N500 as in the case of today to come and protest in the front of the Adamawa State House of Assembly.

“So each time I see them, I feel sorry for this country that some people are doing things they do not believe in. the issue of protesting last week against the certificate allegation they leveled against Bindow is very embarrassing.
There is no abuse whatsoever for Bindow to defeat the duo of Nuhu Ribadu and Halilu Ahmed. I challenge anyone who feels Bindow’s victory is causing sleepiness night in their camp is to come up with evidence of such.

“Any person who is opposed to the Victory of Bindow in the APC primary, I consider the person as an enemy of Adamawa people. Bindow will never for any reason be distracted by this. “If anybody has any particular evidence of Bindow submitting fake certificate to Inec, is to challenge it court, and already they took the Governor to court, only for same people who are in a hurry to see Bindow downfall, result to self-help by paying touts to go to ADHA, Yola to advertise their ignorance.