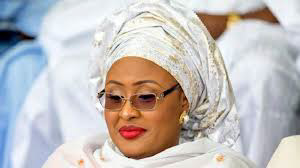 President Muhammadu Buhari’s wife, Aisha Buhari, has accused Nigerian men of allowing two or three unnamed persons to “cage” her husband, thereby limiting his ability to perform to the expectation of millions who voted him into office.

Mrs Buhari said this at a national women leadership summit organised by a political group, Project 4+4 for Buhari & Osinbajo 2019, The Cable reported Friday.

The video of the speech, which has elicited praise and criticisms online, was shared on Twitter by a user, ThankGod Ukachukwu.

Mrs Buhari, known for her fiery public rebuke of her husband, said although over 15 million Nigerians voted for Mr Buhari in 2015, only two or three persons have since taken control of the government.

She did not name the individuals.

“Our votes were over 15 million in the last election, and after that only for us to be dominated by two people that hinders collective team work that we started, which is totally unacceptable,” she said.

“If 15.4 million people can bring in a government, and only for the government to be dominated by two people; where are the men of Nigeria? Where are the Nigerian men? What are you doing? Instead of them to come together and fight them, they kept visiting them one after the other, licking their shoes. I am sorry to use that word.”

The speech was received with loud applause from her audience, who were mostly women.

Mrs Buhari said it was unfortunate that people were only listing the achievements of the president in the fourth year of his government, when that should have been done in the first year. She blamed the lack of team work.

“As we did not buy votes, we formed a government, the government that has overthrown an incumbent government for the first time in the history of Nigeria. After that, what we are expecting is team work; we had a bit of team work, but it wasn’t full.

“All the achievements that have been listed; for the past one month, people have been singing the songs of achievements, we would have achieved that within one year of the administration, but it happens that we are dragging it up to the fourth year.

It is not the first time Mrs Buhari would accuse unnamed associates of the president of hijacking the administration and stalling progress.

In October 2016, she told the BBC that she may not back her husband’s reelection in 2019 except he shakes up his cabinet.

At the time, Mr Buhari dismissed his wife’s claim and mocked her seeming partisanship.

Speaking during a visit to Germany while answering reporter’s questions, Mr Buhari said, “I don’t know which party my wife belongs to, but she belongs to my kitchen and my living room and the other room,” the Associated Press quoted the president as saying.

Mr Buhari and the Presidency are yet to react to his wife’s latest outburst.

Mrs Buhari said she has continued to complain about the two influential persons around her husband for the sake of the future generation.

She said the political space must be allowed for all to participate including those who left the country for greener pasture abroad.

“We should continue to say no because this is the future, not of my age; not of my husband’s age, but the future of our grand children.

“We are talking about better Nigeria, of brain drain, that all those who went out to other countries to work should come back and participate in this country,” she said.