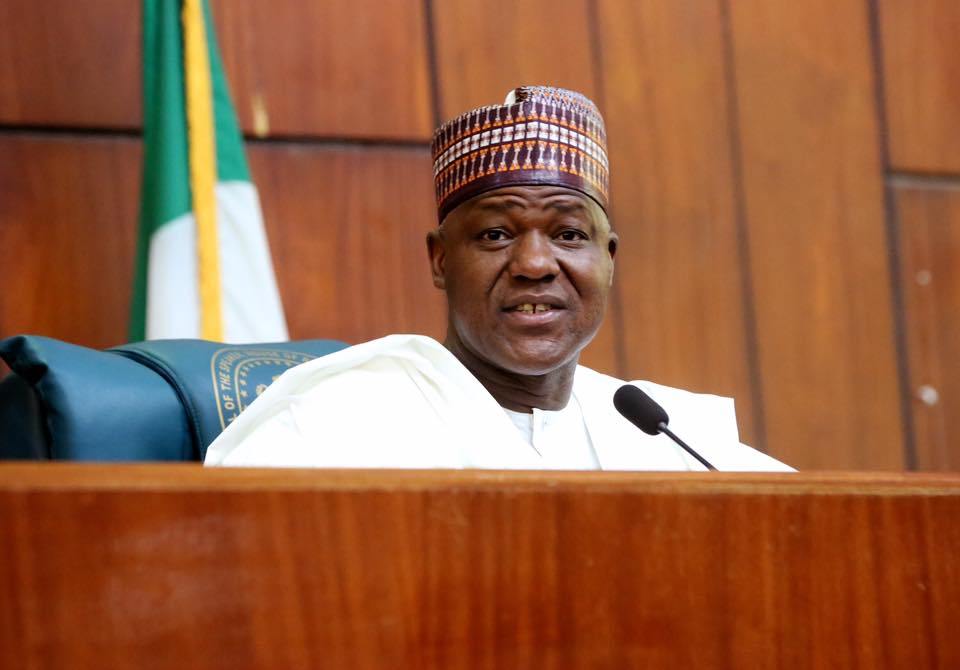 The Speaker of the House of Representatives, Yakubu Dogara, has condemned the distribution of cash to Nigerians by the federal government very close to the general elections.

Mr Dogara stated this on Monday during a public hearing organised by the National Assembly Joint Committee on INEC and Political Parties Matters on Vote-buying and Improving the Electoral Processes in Nigeria.

He said no matter how noble the intent may be, such endeavours amount to vote buying and inducement, and can be considered corruption.

President of the Senate, Bukola Saraki, had made a similar allegation, accusing the federal government of using the TraderMoni programme as a ‘sophisticated vote-buying’ plot to win the 2019 presidential election.

TraderMoni is one of the government’s initiatives under the Government Enterprise and Empowerment Programme (GEEP), a programme targeted at awarding collateral-free loans to two million petty traders across the country.

Vice President Yemi Osinbajo has become the face of the programme as he has launched it in several markets in many states in the country over the past few months.

On Saturday, Mr Osinbajo was in Ilorin, Kwara State for the programme.

But the speaker of the House of Representatives said the programme is fraudulent.

Mr Dogara while delivering his address said the act of inducing the public with cash in exchange for their votes is a fraud that is covered within section 124 (1)(a);(b);(c); Section(124)(2)(4)(5) and Section 130 of the Electoral Act.

He also noted that financial inducement for votes contravenes the fundamental objectives and directive principles of state policy enshrined in Nigeria’s Constitution, even as there is also a lack of political will to implement the laws to offer deterrence to violators. He said even where arrests are made, the prosecution is not done, despite the damaging effect of the practice.

“Vote buying and other sundry criminal manipulations of the electoral process in Nigeria has left our citizens in a state of unmitigated disaster,” he said.

“As a result, we have been married off to a mob. A mob that rules us by the example of their power not by the dictates of law. A mob that rules by fear as an inalienable tool rather than by courage. A mob that accepts the status quo rather than challenge it. Mobs don’t grow others, they only destroy others in order to grow themselves. We follow the mob because we must, not because we are receiving any sense of significance for our own lives from them.”

“Our democracy has stagnated and will sadly remain so until we eliminate all sham elections which have the effect of throwing up the worst of us to lead the best of us.”

“It is instructive to note that the Electoral Act anticipated and captured most forms of electoral fraud including inducement and vote buying.”

“I hope we will have the courage at this event to address the distribution of cash to the public very close to general elections by public officials.”

He said although penalties for these electoral offences are not stringent, there is also lack of political will to implement the laws as it is, even if it is to offer a feeble deterrence to violators.

“Arrests are hardly made and even where arrests are made, prosecutions are unheard of.”

“Indeed, the Fundamental Objectives and Directive Principles of State Policy enshrined in our Constitution envisages that Nigeria shall be a State based on the principles of Democracy and that sovereignty belongs to the people of Nigeria, through which government derives its authority, powers and legitimacy.”

He said any form of contrivance by any person or authority to unduly influence the choice of the voter is condemnable as it is patently an assault on this constitutional guarantee.

“Undue influence of voters has always existed in different forms all over the world, however, the recent phenomenon of direct pricing and buying of votes as if in a market square is very disturbing. It is one of the highest forms of corruption,” he stated.

Reiterating the need for free, fair, credible and transparent elections, he stressed that that it is the very basis for translating the consent of the governed into governmental authority, especially as elections are now so attractive that even pretentious democracies lay claim to holding elections just in order to confer an aura of legitimacy on their rule.

While noting that not all elections are democratic elections, he said that for elections to qualify as democratic, they must be competitive, periodic, inclusive, definitive, free, fair, credible and transparent.

Mr Dogara called on Nigerians and members of the global community to rise up for free, fair and credible elections and fight against the phenomenon of electoral fraud that could destroy the nation’s democracy and install leaders that would operate as if they are above the law.

“The high prevalence of vote-buying in the electoral system of the country is, without any doubt, of great concern to all Nigerians and members of the global community who truly love democracy.

“It is disheartening that this absurd phenomenon has assumed alarming proportions in recent times.

“As citizens, we must not surrender to this criminality as we cannot do so and still expect honour.”

“When political office holders defy the law and corruptly assume office, they will always operate as if they are above the law,” he added.

The speaker further noted a more worrisome dimension to vote buying which he stated is the alleged use of the officials of the electoral umpire and officers of security agencies to induce or intimidate and coerce voters to vote for particular candidates.

“Such absurdities have been widely reported in the media and confirmed by some local and international observers in respect of the recently concluded governorship elections in Osun State.

“As expected, all lovers of democracy worldwide rose to condemn these despicable incidents. Condemnation is not enough, it will amount to hypocrisy if we don’t take the bull by the horns by taking concrete steps to eliminate these evils that make a mockery of our hard worn democracy.

“Let me seize this opportunity to call on all people of goodwill in our country to rise in condemnation and denunciation of vote-buying and all forms of electoral malpractices.”

“Indeed, electoral fraud is one of the worst forms of corruption, and should be treated as such.”

He added that it is the only way Nigeria can guarantee the stability and growth of its democracy.