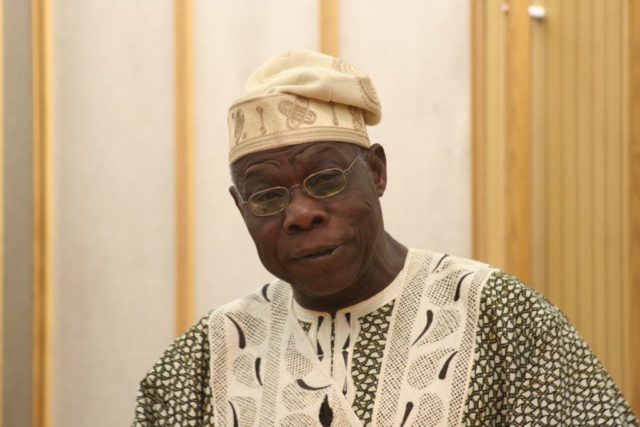 Chief Olusegun Obasanjo was an election rigger without peer and is responsible for most of the flaws in the Nigerian political economy since 1999.

Asiwaju Bola Ahmed Tinubu, the national leader of the All Progressives Congress gave this view in Lagos on Tuesday in a letter entitled: ‘Chief Obasanjo -At War Against his Own Deeds’.

Tinubu wrote the letter in response to Obasanjo’s earlier letter to President Muhammadu Buhari, in which Obasanjo chastised Buhari and his administration, claiming, without any proof, that the president was preparing to rig next month’s poll.

In Tinubu’s view, Obasanjo in levelling the uncorroborated accusation was merely projecting on to the APC the electoral misconduct he would have perpetrated if still in power.

Tinubu, also the Co-Chair of the APC Presidential Campaign, said Obasanjo was handed Nigeria on a silver platter in 1999. But he chose to squander the opportunity of leadership.

“This man should have positioned himself to be the father of the nation. All the goodwill that could be granted a political figure was bestowed on him. The global economy was such that it should have fuelled our growth.

”Everyone wanted Nigeria to succeed after emerging from years of noxious military rule. Despite the flawed exercise that rendered him president, we all bit our tongues in hope that he would say and do the right things that would move Nigeria forward.

“Instead of being a unifying figure as Commander-in-chief, he lowered himself to being a divisive, vindictive conniver. There was no table which he neared that he did not upset and overturn, ” he said.

Tinubu said that Obasanjo had the opportunity of placing the economy on the path to durable growth and shared prosperity through diversification, industrialisation and creation of a social safety net for the poor.

”He tried to convert our young democracy into a one party state. His PDP boasted that they would rule for 60 uninterrupted years. Never did they boast that they would govern us well during even one year of the sixty.

”Instead, he handed the economy over to a tight group of cronies, turning what should be a modern economy into a version of the mammoth trading companies that dominated the 17th and 18th century.

“We hoped that Obasanjo would personify statesmanship, thus showing the way to a more benign political culture. Instead, he bickered and feuded with his vice president and mostly anyone who dared remind him that he was human and thus infallible.

“Given the vast margin between the good he could have achieved and the nebulous feats that comprise his true record, Chief Obasanjo is the person most responsible for the flaws in the Nigerian political economy since 1999, ” he said.

Tinubu also described the former president as an election rigger without peer.

According to Tinubu, the ways of Obasanjo are not those of the APC. And this difference has meant the better for Nigeria.

“There is no election which occurred under Obasanjo’s watch or in which he participated that did not involve cheating on his part.

“Even the late President Umaru Musa Yar ‘Adua admitted he was the beneficiary of a flawed election engineered by none other than today’s vociferous complainant.

”Former President Obasanjo is many things to many people; but he is all things unto himself.

”This election will be a free and open exercise of the people’s right to choose their leaders. Obasanjo makes fiery allegations against this right but offers no corroborating evidence; he presents only reams of words.

”This is because Obasanjo is projecting onto the APC the misconduct he would have wrought if still in power. Yet, the ways of Obasanjo are not those of the APC. And this difference has meant the better for Nigeria,’ he said