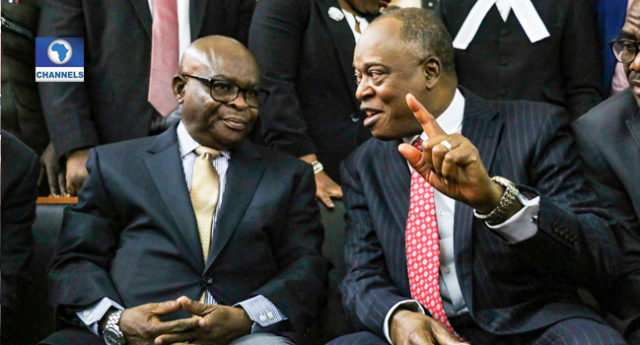 Justice Walter Onnoghen on Wednesday closed his case in his ongoing trial at the Code of Conduct Tribunal.

Counsel to the suspended CJN, Mr. Chris Uche told the tribunal that, having looked at all the evidence and testimonies before the tribunal, the defence has come to the conclusion to close its case and will be applying in line with rule 14 of the tribunal to file their final address.

He noted that to ensure that they file a written address that will take into consideration all that has been put before the tribunal, they will be asking for 14 days to file all their addresses and leave it to the tribunal to decide one way or the other.

Responding, the prosecutor, Mr. Aliyu Umar said that even though the defence had told him they will be asking for 14 days the practice direction of the tribunal did not make any specific time for that and so it is at the discretion of the tribunal.

He, however, agreed that parties need enough time to be able to put together their final addresses and that whatever time is given to the defence the same amount of time should be given to the prosecution.

The tribunal resolved to give three working days to the defence to file their written address while the prosecution will also get the same amount of days and thereafter the tribunal will fix a date for ruling on pending applications and the judgment.

It also adjourned to 12th of April for the adoption of written addresses.

ORDER ARREST OF STEVEN MADUWA NOW TO SHOW YOU ARE SERIOUS WITH FIGHTING INSECUIRTY;...