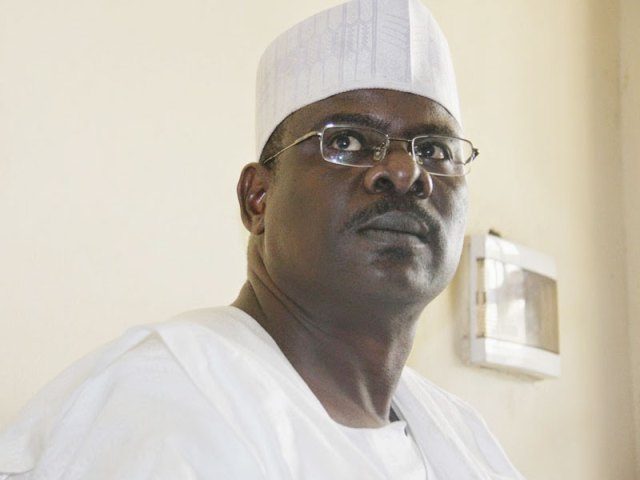 Despite the resolution of the All Progressives Congress (APC), Ali Ndume (APC, Borno South), has unveiled his agenda as a candidate for the Senate presidency in the ninth National Assembly.

Mr Ndume’s recent act is against the resolution of the APC which endorsed Ahmed Lawan as the Senate president.

However, in his reaction, Mr Ndume said the party chairman unilaterally picked Mr Lawan without the backing of the party.

Both the national chairman of the party, Adams Oshiomhole and the party’s national leader, Bola Tinubu, had called on Mr Ndume and other aggrieved members of the party to support Mr Lawan as the Senate president.

According to Punch Newspaper, Mr Ndume on Tuesday, revealed his nine-point agenda in a document as he promised to improve upon the performance of the 8th Senate.

The lawmaker, a former Senate leader, vowed to uphold the independence of the legislature and expressed his willingness to “work harmoniously and inter-dependently with the executive without undermining the principle of separation of powers.”

He also said he will make the office of the Senate president less attractive by reducing the unnecessary privileges attached to it.

Other promises made by the lawmaker include prioritising the passage of the Constituency Development Bill to make “constituency projects more transparent, accountable, efficient and effective.”

He explained that the upper chamber would agree on timelines for confirmation, passage of bills especially the annual budgets, which he said, would not exceed 90 days from the day of submission.

“We will make laws that will block leakages devise improved means of generating revenue, especially through the amendment and review of our tax laws which will help to reduce reliance on local and foreign loans to finance budget.

“We will run the 9th Senate transparently, through open accountability with full participation of all senators. For example, we will transfer the approving powers of the privileges of the senators like foreign travels, allowances to Senate services committee or a new committee to be known as “ways and means committee,” Punch quoted him saying.

Not leaving out the executive, Mr Ndume said his leadership would uphold the party’s principles and policies and that the Senate under him would make laws and review existing ones in tandem with the APC’s Next Level agenda for Nigeria.

The party’s leadership has, however, promised to take a decision on Mr Ndume’s declaration.

Last weekend, Mr Tinubu said any APC lawmaker who works against the dictates of the leadership of the party should be ready to quit the APC.

That threat as, however, not deterred Mr Ndume who has argued that the APC could only zone the position to a region and allow senators from that region contest among themselves.

Both Mr Ndume and Mr Lawan are from the North-east of the country.