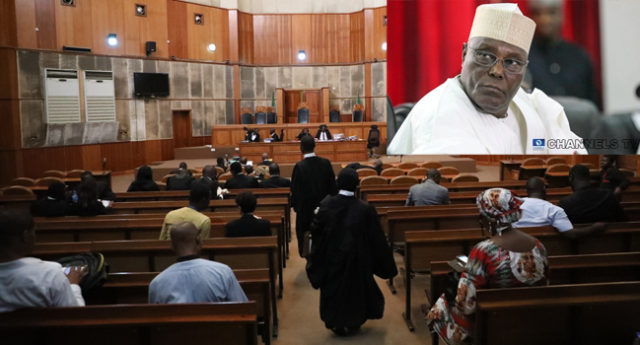 The All Progressive Congress (APC) and the winner of the February 23, 2019 Presidential Election, has filed a motion at the Presidential Election Petition Tribunal in Abuja that the candidate of the People’s Democratic Party in the poll, Alhaji Atiku Abubakar, is not a Nigerian and therefore not qualified to have stood for the election.

The Party claimed that the former Vice President is a Cameroonian and not a Nigerian citizen and his petition against President Muhammadu Buhari, its own candidate, should be dismissed for lacking in merit.

In a reply to the petition of Atiku and the PDP praying for their declaration as the lawful winner of the presidential poll, the APC said that the 11.1 million votes recorded in favor of the two petitioners should be voided and considered a waste by the Presidential Election Petition Tribunal.

The APC’s reply to the petition, filed by its lead counsel, Lateef Fagbemi faulted the candidacy of Atiku in the election insisting that as a Cameroonian, he ought not to have taken part in the presidential poll of Nigeria in the first instance.

The Party averred that Atiku was born on November 25, 1946, in Jada, Adamawa, in Northern Cameroon and is, therefore, a citizen of Cameroon and not a Nigerian by birth.

Going down memory lane, APC claimed that prior to 1919, Cameroon was being administered by Germany and that following the defeat of Germany in World War 1, which end d in 1918, Cameroon became part of a League of Nations mandate territory which consisted of French Cameroon and British Cameroon in 1919.

APC further argued that in 1961, a plebiscite was held in British Cameroon to determine whether the people preferred to stay in Cameroon or align with Nigeria.

APC, therefore, said that contrary to the assertion of Atiku in his petition, he (Atiku) had no right to be voted for as a candidate in the election to the office of President of the Federal Republic of Nigeria held on February 23, 2019.

The party averred that by reason of Atiku not having qualified to contest the election, all votes purportedly cast for him and the PDP in the February 23 election are wasted votes.

APC also faulted the allegations of non-compliance with relevant laws made by Atiku and PDP, adding that their failure to make specific references to the compliance issue has a fatal effect on the petition and therefore the petition did not have enough material to justify the ground of any relief sought.

Atiku had in his petition with reference number: CA/PEPC/002/2019 faulted the conduct of the February 23 Presidential Election on the ground of non-compliance with relevance electoral laws and other malpractices such as intimidation of voters, the unlawful arrest of his sympathizers and the harassment by soldiers and other law enforcement of those wishing to vote for him.

The party, therefore, prayed the tribunal to uphold the victory of its candidate, Muhammadu Buhari, who polled 15,191,347 to emerge the winner and his subsequent declaration as president-elect by INEC while also urging that the petition against the victory should be dismissed for having no cause of action.

Meanwhile, no date has been fixed for the hearing of the petition.