The #SenatorElishaAbbo and #Senatorstepdown have been trending online since Tuesday when online news platform posted a CCTV video showing Senator Elisha Cliff Abbo was seen assaulting a saleswoman in a sex toy shop in Abuja.

On February 9th 2004, Mr Cliff Elisha Ishaku took the authorities of the Nigerian Naval Training College (NNTC), Onne, Port Harcourt, Rivers State, to court for allegedly denying him admission into the college on the grounds of his health status despite passing the recruitment test.

In a legal action instituted on his behalf by the vice chairman of the Nigerian Bar Association, Abuja Chapter, Barrister Jude Okeke, at the Abuja Federal High Court, Ishaku is seeking among others, a declaration that his withdrawal from the School, by the Naval College and the Ministry of Defence on account of his testing positive to HIV virus is illegal, unlawful and breach of his fundamental right to personal dignity.

On July 2, 2019, Abbo was caught in the act of physically abusing a nursing mother inside a sex shop in Abuja. In his response to the criticism, Abbo claimed the adult store owner called him a drunk.

In the CCTV video that has been widely circulated on social media, Elisha Abbo is aided by a Nigerian police officer who also participates in assaulting the females.

So many Nigerians have however frowned at not just the senator’s barbaric and animalistic behaviour, but also that of the uniformed Nigerian police officer whom the Nigerian police force has refused to fish out, for not just keeping quiet, but also joining hands in the assault by arresting the woman in question, who was at the time a nursing mother.

Once looked upon as a new face of the youth in politics, Elisha has been shamed and disowned for such a behaviour unfitting for a public office holder.

There are protests ongoing for his arrest. See below a video of the protests as posted on Twitter by Amplified Radio @AmplifiedR: 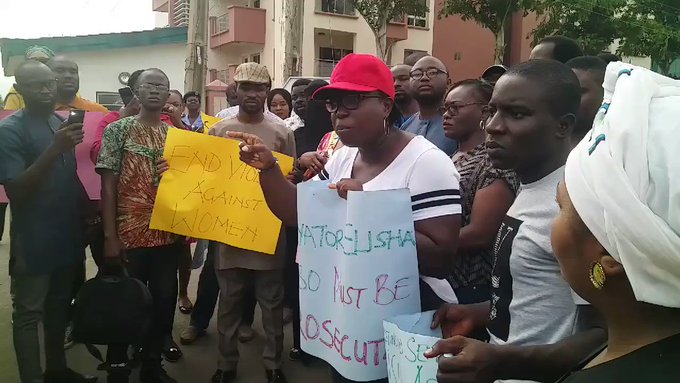 Elisha is not above the law, he must be brought to law without any formal complain.#SenatorElishaAbbo

194 people are talking about this

Reps Resolve To Invite ASUU, Others Over Ongoing Industrial Action