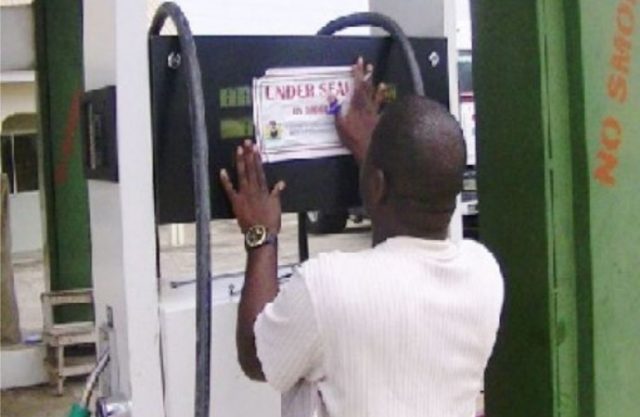 The Adamawa office of the Department of Petroleum Resources (DPR), has commenced the sealing of illegal filling stations in the state.

The exercise which commenced on Thursday, has led to the sealing of six filling stations in Gombi, Hong, Mubi North and Mubi South Local Government Areas.

Speaking on the exercise, Alhaji Ibrahim Ciroma, DPR Operations Controller in charge of Adamawa, said the department had identified 45 illegal stations in the state.

“We have sent the lists to the Police to get them dismantled.

“It is through these illegal stations that you have all those malpractices like diversion, smuggling and so on,’’ Ciroma said.

The controller also spoke on the discovery of one of the illegal stations on the outskirts of Mubi town along the Mubi-Gella road.

He noted that the station which was found with thousands of jerry cans used for smuggling products was operating close to a security checkpoint unchallenged by the security agents.

“The station has a warehouse with more than a thousand jerry cans.

“The smuggling has been happening and we have many check points on this border road and nobody has done anything about it.

“We are able to locate this place on a tip-off. Somebody told us what is happening here.

“I will continue to call on security agencies to do their work properly. One just can’t understand why we have so many check points along this road and these people pass without any challenge,’’ Ciroma said.

According to him, this is one of major routes through which products were smuggled to Cameroon,’’ Ciroma said.

Journalists who accompanied the DPR team in the operation, reports that many jerry cans filled with fuel products were also discovered.

Adamawa 2019:Don’t Vote for Candidates That are regular Visitor to Efcc-HammanDiko

Breaking:“I Have No Plan to Dethrone Emir of Mubi” – Bindow