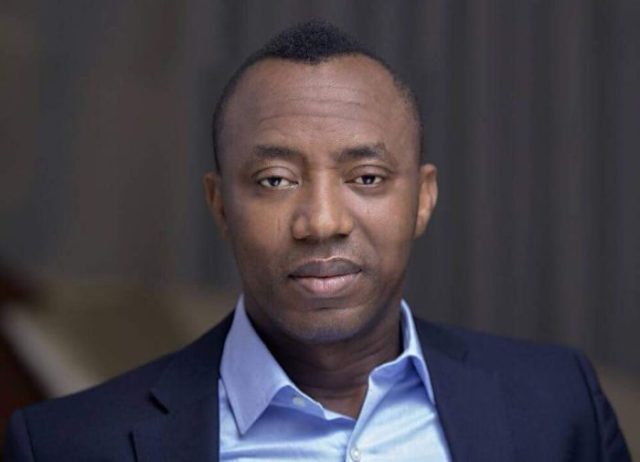 The Network of International Human Rights Organisations and Coalitions say it may soon adopt detained Publisher of Sahara Reporters, Mr Omoyele Sowore, as a “Prisoner of Conscience”.

The Civil Society Network Against Corruption (CSNAC) said on Mondfay in Lagos that it was working with renowned rights groups across the world to ensure that Sowore was adopted as a Prisoner of Conscience
unless the Federal Government releases the activist without further delay.

They also expressed shock that the Nigerian authorities were making frivolous charges against Sowore who had been in custody since Aug. 5.

The group also called for the release of Olawale Bakare, a member of #RevolutionNow arrested in Osogbo, Osun, on Aug. 5, Publisher of Cross River Watch, Mr Agba Jalingo and Ekanem Ekpo. The last two were arrested by the police and have yet to be taken to court.

“The continoued detention of Sowore is an embarrassment to Nigeria as a country. Everywhere we visit across the world, people are asking questions about Sowore’s detention.

“Many people do not understand the logic of laying charges of treason against Sowore simply because he used the word revolution.

“His incarceration continues to put a question mark on the credibility of the Nigerian government. Democracy dies when the culture of debate and the tradition of protest are lost,” the group said in a statement by CSNAC Chairman, Mr Olanrewaju Suraju,

CSNAC said the Nigerian government had beyond imaginations embarrassed itself by charging Sowore for “insulting the President”.

“It is even more ridiculous that he is being charged for insulting Mr President and also for money laundering where money was legitimately transferred through the financial institutions.

“These are frivolous charges aimed at seeking justification for his illegal arrest and continuous detention.”

CSNAC said from indications, the Nigerian government was desperate to press charges against Sowore and ensure he is jailed at all cost.

Suraju said Sowore was being hunted in part, due to series of publications in Sahara Reporters that consistently exposed corrupt practices in this and previous governments.

“Sowore is obviously a victim of vengeance. Corrupt politicians and security chiefs whose dirty deals have consistently been exposed by Sahara Reporters are looking for ways to settle scores. They think by
bringing down Sowore, Sahara Reporters will die.

“Its an illusion to think by keeping Sowore in jail, Sahara Reporters would be off the global network. This is a mistake because Sahara Reporters has assumed the status of an independent entity,” he said.

CSNAC also dismissed the charge of money laundering by the Department of State Security, (DSS), saying it was an attempt to blackmail Sahara Reporters and its publisher.

Sowore was arrested on Aug. 5 in Lagos and the Federal Government obtained an ex-parte order granting his detention for 45 days.

After keeping him for almost two months, he was charged for insulting President Mohammadu Buhari during a life programme on AriseTV. The government also accused him of treason.

He was also charged for transferring the sun of $19,975 from his personal account to Sahara Reporters.