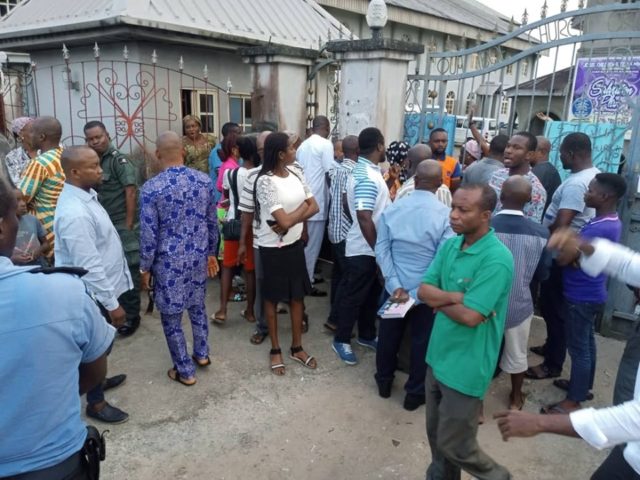 The police have sealed off a church in Uyo where the Akwa Ibom governor, Udom Emmanuel, attends.

Armed police officers in 10 trucks arrived Qua Iboe Church, at 112 Ikot Ekpene Road, early in the morning on Sunday and barricaded the church entrance, preventing worshippers from entering the premises.

One woman with her two children who wanted to get to the church was seen stepping down from Keke (a commercial tricycle). She and her children walked back and then disappeared into a nearby street, apparently frightened by the presence of the police officers.

Later in the day, around 10 a.m., some of the church members began gathering by the roadside, while the police continued with the barricade.

The police action is due to a lingering factional crisis in the church.

“The police have padlocked the main gate of the church, they don’t allow anybody to enter the church,” a security guard in the church told Journalists in the morning.

The guard who gave his name as Attah said he and a co-security official were the only two persons inside the church premises, as at the time he was speaking via telephone with a PREMIUM TIMES reporter.

“The policemen came here as early as 6 a.m., and locked the gate after ordering people who were sweeping the church to leave,” he said.

“Our church is not a police station, they should not be doing this! They should leave the place and go back to their station!” Samuel Magnus, the church youth leader, said angrily on the phone while preparing to leave home for the church.

“I’ll be going there now to ascertain what’s going on,” Mr Ettang said.

“The major problem in the church is that the United Evangelical Church wants to take over the church from Qua Iboe (Church), and they are using all means to do that,” he said.

Qua Iboe Church was founded around 1887 by an Irish missionary, Samuel Bill, who served in Ibeno, in the present-day Akwa Ibom State.

The church, whose headquarters is in Akwa Ibom, derived its name from the Qua Iboe River which flows through the state into the Atlantic Ocean.

The 131-year-old church split into two factions in Nigeria about 17 years ago when some members, uncomfortable with the name Qua Iboe, pushed for a change of name to United Evangelical Church.

Some of the church’s branches across the country have embraced the new name, while others, mostly in Akwa Ibom, have stoutly rejected it because of a special affinity with the name Qua Iboe.

The Akwa Ibom governor, Mr Emmanuel, is a member and a deacon of Qua Iboe. He used to worship with his family in a branch of the church in Lagos before he moved down to Uyo on his appointment as the secretary to the Akwa Ibom government.

Mr Emmanuel, since he relocated to Akwa Ibom, occasionally worships at the church branch that the police have sealed off.

The governor a few days ago held an emergency meeting with the leadership of the branch of the church to find ways of resolving the crisis.

Mr Ettang, the chairman of the church council, who was present at the meeting with Governor Emmanuel, said the governor’s approach to the conflict was not helpful to the church.

He said the governor wants one Ibup Emah, a former pastor of the branch, to return to the church against the wish of the majority of the people in the branch.

The women in the church carried out a peaceful protest at the church premises on Saturday, voicing out their rejection of Mr Emah.

Mr Emah declined to comment on the issue when PREMIUM TIMES contacted him, Sunday morning. “I don’t know what’s going on, I am no longer there, I have left the church,” he said.

Mr Ettang said the pastor was not being forthright in his remark here. “At the meeting with the governor, he (the pastor) was indirectly appealing to the governor that he wanted to return to the church,” he said.

After their meeting with Governor Emmanuel, Mr Ettang and the church secretary, Sylvester Edem, including the pastor, Mr Emah, signed an undated press statement which implied that the pastor had been accepted back by the church.

The statement, which claimed that normalcy had returned to the church, asked the people “to feel free to return to the place for worship as their safety in the course of normal church activities is guaranteed”.

A member of the church who did want his name mention in the story for fear of victimisation said the church elders who met with the governor were not allowed to speak at the meeting.

“The governor just told them to allow the pastor to come back, he didn’t give them a chance to say anything. If he did, maybe he would have known that we don’t want the pastor back in our church,” the member said.

It is not yet clear who invited the police to seal off the church premises.

Mr Magnus, the church youth leader, said Governor Emmanuel could not have directed the police to seal off the church premises.

“The governor, in our meeting with him, warned that nobody should take policemen to the church,” Mr Magnus said.

Two members of the church, however, blamed the crisis on the governor’s adviser on religious matters, Daniel Akwatang, who is also a member of Qua Iboe Church.

“We are not sleeping, we have been working very hard, and the matter is still escalating.”

The governor’s aide refused to speak further on the crisis.

Meanwhile, the traditional leaders of Oku clan, the indigenous people who donated the land for the building of the church more than 10 decades ago, have cautioned against changing the church’s name from Qua Iboe to United Evangelical Church.

The traditional leaders under the auspices of the Oku Clan Council of Traditional Rulers and Chief said in a statement that they are willing to donate another parcel of land for the building of another church that could be named United Evangelical Church so that peace could reign in Qua Iboe.

Their forebears gave the land to Qua Iboe Church, and not to the United Evangelical Church, they said.

Governor Emmanuel had made a few attempts in the past to bring a general solution to the rift within the Qua Ibo Church in Nigeria.

“We’ve gone very far on the reconciliation and we will soon be there,” Mr Emmanuel said in July last year when he visited a branch of Qua Iboe Church in Etinan.

The governor, in February 2017, had convened a peace meeting at the Government House, Uyo, with the factional leaders of the church.

Those present at the 2017 meeting included a former chief of air staff in Nigeria, Nsikak Eduok, and a retired major-general and former director-general of the National Youth Service Corps (NYSC), Edet Akpan. Both men, who are very influential in the church’s affairs, belong to different factions.

The governor during his last year visit to the church in Etinan spoke about his past effort to reconcile the church.

“I gathered all the pastors and elders and told them I had only five minutes to reconcile the church if one person can raise his hand and say this is what God says about the situation. Nobody could do that.

“So, because nobody could do that, I could only say let everybody hold their peace and let’s see what God would do,” he said.

“Nobody can say this is what God is saying about this matter. We need to find a Christian solution to the issue.

“I believe very soon, very very soon, this should be over and we will be back again as one body.”