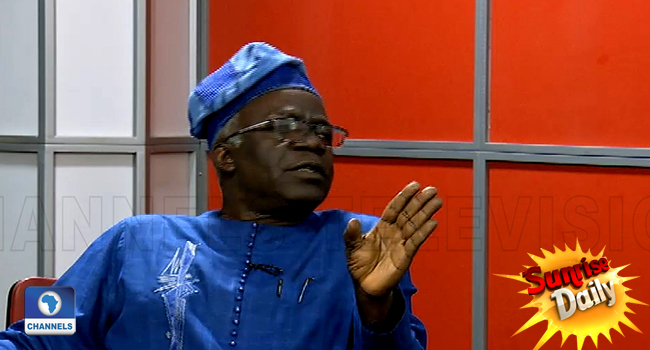 A human rights lawyer, Femi Falana, has accused the Nigerian government of waging war against the media in preparation for the 2023 elections.

Mr Falana spoke in Lagos Thursday at a conversation on the shrinking media and civic space in Nigeria and public presentation of a book, Testimony to Courage, essays in honour of Dapo Olorunyomi.

He expressed worry over the incessant attack on the media, saying it was part of an elaborate plan to cow the media into submission so that it would not challenge the policies of the government in the build-up to 2023 elections.

“Let me say this our country has gone to the dogs and the media must help,” he said.

“And that is why the war is against the media because for the 2023 race the media must be silenced. You will have the third term campaign very soon. Very soon they are going to destroy all possible opponents and they have started. So by the time they bring in the third term agenda, the media would have been gone.”

“But we are not going to allow it and I have said it publicly, no dictator can defeat the Nigerian people,” he added.

Many journalists have been arrested, detained and prosecuted in the past few years for various offences relating to their work.

A PREMIUM TIMES journalist, Samuel Ogundipe, was arrested last year and detained for refusing to disclose his sources for a story. He was later charged by the police with stealing documents he used to write the story, charges the police failed to appear in court for.

On Thursday, Mr Falana also made reference to the trial of the publisher of Sahara Reporters, Omoyele Sowore, in Abuja.

Mr Sowore, a presidential candidate in the last general election, is being tried for calling for a revolution against bad governance. The government accuses him of treasonable felony and money laundering.

The Senior Advocate of Nigeria accused Justice Ijeoma Ojukwu of the Federal High Court in Abuja of bias against his client, Mr Sowore.

He said based on the bail conditions Ms Ojukwu gave Mr Sowore, the latter was already convicted to a non-custodial sentence without trial.

He said: “Nobody has ever been given the kind of bail Sowore was given. All those who looted the treasury have never had their movement restricted.”

“Sowore has been granted bail but his movement has been restricted to Abuja. His family is in America, he doesn’t work in Abuja, he has no house in Abuja yet he has been asked to stay in Abuja. The trial may last ten years. It has never happened in Nigeria before.

“Sowore has been banned as a journalist from speaking. As a politician, he cannot address a rally until the case is determined and we don’t know when that case will be concluded. That is not all. I made it clear to the judge yesterday that I have practised law for 37 years, I have never seen what I saw in court yesterday.”

Mr Falana then elaborated on the happenings during Mr Sowore’s trial on Thursday.

“We got to the course yesterday, lo and behold the court had concluded behind us to have a secret trial. Because some of the witnesses could not give the evidence in open and they have brought the gadgets to court. And I got to court and asked what is going on here; they said, you see Mr Falana it’s your case. How?

“There has been no application because all proceedings and hearing in our court shall be in the open. So, if you are going to have a trial in camera for security reasons, for the interest of children you will apply in open court. But no application was made. And so, when I asked what happened and the judge pretended not to know, I said immediately we cannot go on today.

“She said why? (I said) you have charged my client with treasonable felony, I have not met them they have not briefed me because they are kept in custody. And the judge said Mr Falana that doesn’t matter they will open their case you will meet them later.”

The rights lawyer said he insisted that the case could not continue “because behind us your court had colluded with the prosecutor to take witnesses behind us in your court and these are the gadgets here.”

“I said the prosecutor had confided in me that the witnesses would pass through her door so that they would not be seen by us.”

Mr Falana also said he intends to file for a transfer of the case from the Abuja court.

“We are not likely to go back to that court, you can quote me publicly.

“So we are taking an appropriate step to move the case from that court.

“Sowore didn’t commit any offence in Abuja so he can’t be tried in Abuja. So we are going there very soon.”